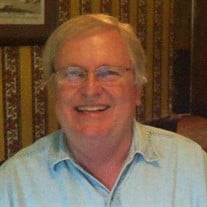 Carthal McKinley "Skip" Jones came into this world as a Christmas present to his family on December 25, 1948 in Fargo, N.D. He unexpectedly left this world at age 71, one week after a fall caused severe injuries. He died in Fargo, N.D. on Oct. 19, 2020, shocking his family and friends. Skip Jones was preceded in death by his parents, J.R. Jones and Mabel I. Jones, and niece Tonya Peterson. Skip spent a lot of his time growing up in the upper Midwest enjoying fishing, hunting, and playing his guitar during his teen years. After he graduated from Evansville High School, Evansville, MN in 1966, he later graduated from Moorhead State University, Moorhead, MN. Between schools Skip enlisted in the Navy and found himself serving at duty stations in Florida, Korea, and Honolulu, Hawaii. It was in Hawaii that he met and eventually married Wendy Mohl of Edenwold, Saskatchewan Canada. Their union blessed them with one daughter, Lindsay Jones (Fergus Falls). Skip was a devoted father and spent a great deal of time caring for and enjoying Lindsay. Skip spent 30 years working for Minnesota Job Services (the Workforce Center) mostly in Fergus Falls. He was liked and respected by his colleagues and the many people he helped find work. He was a strong supporter of workman’s rights. In his later life, Skip enjoyed his music again and was enthusiastic about playing guitar with his “Blues Buddies," or as they called themselves the BBs. He was talented enough to entertain the public but Skip preferred saving his music to play for his friends and loved ones either in his basement music room with the BBs, or by grabbing one of his many guitars that decorated his home. Over the years, Skip and his BBs attended the Fargo Blues Fest together, as well as many other concerts. Skip was one of the most generous people around. He not only helped anyone who needed help but also worked tirelessly as both a vocal and written advocate petitioning for his daughter and others with disabilities. One of his proudest achievements was to be instrumental in retaining the dental clinic in Fergus Falls so that Lindsay and others with special challenges could have their teeth taken care of without traveling hundreds of miles. He also advocated for Productive Alternatives in Fergus Falls, the agency that runs Willows, Lindsay’s special school. Skip was intelligent, talented, and exhibited a great sense of humor. He is survived by one daughter, Lindsay Jones of Fergus Falls, MN, sister, Aloma Wieber (Steve) of Alexandria, and sister, Sandra Peterson (Marshall) of Maple Grove, Minnesota, as well as nephew Richard Wieber, niece Tammy Nicholson (Bobby), and nephew David Peterson (Teresa). Skip also leaves behind a very special friend and partner of ten years, Carol Bradley Bursack of Fargo, N.D. Carol was with him the last week of his life in the Fargo hospital until his untimely death. Skip will be forever loved and missed. He is at peace with his Lord and Savior Jesus Christ. There will be no service at this time due to COVID concerns and restrictions, however, Skip’s remains will one day be interred in Canada with his daughter Lindsay. For those who would like to donate in memory of Skip, his interest in music led him to give to Prairie Public Television and other public TV and radio stations, as well as various veteran’s organizations, and those that contribute to the rights of people living with disabilities. Assistance provided by the Olson Funeral Home in Fergus Falls. Online condolences may be sent to www.olsonfuneralhome.com

Carthal McKinley "Skip" Jones came into this world as a Christmas present to his family on December 25, 1948 in Fargo, N.D. He unexpectedly left this world at age 71, one week after a fall caused severe injuries. He died in Fargo, N.D. on Oct.... View Obituary & Service Information

The family of Carthal "Skip" Jones created this Life Tributes page to make it easy to share your memories.

Carthal McKinley &quot;Skip&quot; Jones came into this world as a Christmas...