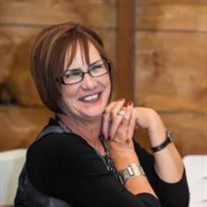 Carrie Jensen, 64, of Park Rapids, formerly of Underwood, died on Monday, January 24, 2022 at Sanford in Bemidji. Carrie Ann Walls was born March 7, 1957 to Donald and Laura (Aanden) Walls in Hibbing, MN. As a young girl she and her family moved to Underwood, where she attended country school through 6th grade. In 1973, they moved to Columbia Falls, MT. She graduated from high school in Columbia Falls in 1975. After high school she attended college in Billings, MT. She returned to Underwood and worked at Perkins and White Drug in Fergus Falls. On May 10, 1980, Carrie married Wayne Jensen at Tingvold Lutheran Church in rural Underwood. The couple moved to the Fargo area, returning to Underwood in 1983. Through the years she worked for Somody Supply and later, Lutheran Social Services as a Social Worker, retiring in August 2021. Carrie was a lover of life. She did not just exist, but rather used her time to live. She was a true adventure seeker and lived her life according to her beliefs, with joy and purpose every day. She was the last one up at many bonfires under the stars and the first one awake to enjoy a cup of coffee with the birds in the morning. Carrie was always present and immersed herself into whatever she was doing and whoever she was with. She had a way of making you feel like there was nothing more important in the world than you. Carrie was an avid lover of nature who enjoyed gardening, backpacking, fishing, hunting, camping, and cross-country skiing. She was a skilled colorer, an accomplished cartographer of children’s treasure maps, and crafter. She was a beloved wife, a proud mother, cherished friend, and an adored grandma who will be profoundly missed. Preceding her in death were her parents, Donald and Laura. Carrie is survived by her husband, Wayne of Park Rapids; two sons, Derek (Danielle) Jensen of Park Rapids and Ryan (Kelley) Jensen of Grand Rapids; four grandchildren, Evelynn, Henry, Jack and Oliver, and a new granddaughter expected in the Spring of 2022; one brother, Craig (Pat) Walls of Kamiah, ID, and three nephews, Dustin Walls, Tyler Walls, and Mike Walls. A Time of Remembrance will be scheduled at a later date. Arrangements provided by the Olson Funeral Home in Fergus Falls. Online condolences may be sent to www.olsonfuneralhome.com or mailed to PO Box 409 Park Rapids, MN 56470

Carrie Jensen, 64, of Park Rapids, formerly of Underwood, died on Monday, January 24, 2022 at Sanford in Bemidji. Carrie Ann Walls was born March 7, 1957 to Donald and Laura (Aanden) Walls in Hibbing, MN. As a young girl she and her family... View Obituary & Service Information

The family of Carrie Jensen created this Life Tributes page to make it easy to share your memories.