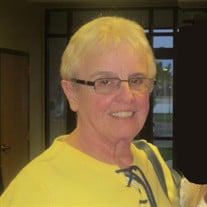 Carol Joy Hovland, 77, of Fergus Falls, died Monday, June 4, 2018, at Bethany Retirement Living, Fargo, ND. She was born December 25, 1940, in Breckenridge, MN, the daughter of Joseph and Hazel (Miller) Houghtaling. She grew up in Foxhome and was baptized and confirmed at the Foxhome Lutheran Church. Carol was a graduate of Breckenridge High School class of 1958. On July 24, 1959, Carol was united in marriage to Doug Hovland at the Foxhome Lutheran Church. They made their home in Fergus Falls where she began a long career at the Fergus Falls Regional Treatment Center, retiring in 1999 as the Director of DDRC. Carol was a volunteer with the American Cancer Society, Relay for Life, Lake Region Cancer Center, and Meals by Wheels. She was an election judge and an active member of Bethlehem Lutheran Church. She was a caregiver, enjoyed playing cards, visiting family and friends and enjoying coffee. She was a leader for Bluebirds and Campfire Girls, and followed her family in all their activities, her family meant more to her than anything. Special memories include time at West Battle Lake and winters in Yuma, AZ. Preceding her in death were her parents and a son-in-law, Glenn Moses. Survivors include her husband, Doug; two daughters, Jackie Berndt of Fargo and Brenda Moses of Fergus Falls; four grandchildren, Adam Berndt, Abby Berndt, Jenna (Alex) Lund and Joseph Moses; one great-grandson, Micah Lund; a sister, Patricia (Derrell) Nitz of Evansville; a brother Kent (Margie) Houghtaling of Hinckley, along with nieces and nephews. Visitation: One hour prior to the service at the church Service: 1 p.m. Friday, June 8, 2018, at Bethlehem Lutheran Church in Fergus Falls Clergy: Reverend Tom Peterson Interment: Bethlehem Cemetery, Fergus Falls, MN Arrangements are provided by the Olson Funeral Home in Fergus Falls Online condolences may be sent to www.OlsonFuneralHome.com

The family of Carol Joy Hovland created this Life Tributes page to make it easy to share your memories.