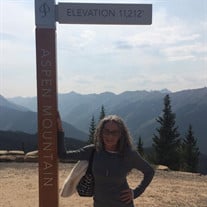 Carmen Moser, age 63, a longtime resident of Fergus Falls, died at St. Anthony Hospital in Lakewood, Colorado, on October 10, 2019, surrounded by her loving son, sisters, brothers, and dear friend. Carmen Marie Moser was born on January 8, 1956, in Friend, Nebraska to William Earl and Melva Jean (Harling) Moser. She spent most of her childhood years in Dorchester, Nebraska, later moving with her family and attending school in Battle Lake, Walhalla, ND, and finally, Wheaton where she graduated from high school in 1974. Carmen was married to Randall Haas and they had a son, Justin. After living briefly in Nebraska, Carmen and Justin moved to Fergus Falls in 1981 to be near family and she resided there until the time of her death. After suffering a workplace accident in 1982 Carmen spent most of her adult life battling serious illness and life-threatening episodes of respiratory and renal failure and all the related conditions that finally claimed her life. In 1994, she was the recipient of a double-lung transplant at the University of Minnesota Hospitals. Later, Carmen would receive two kidney transplants necessary because of complications caused by the anti-rejection medications on which she depended. On September 16, 2019, she celebrated the 25-year anniversary of the initial lung transplant. As serious as Carmen’s health problems were, they were no match for her strong will and personality. She refused to let illness define her or the way she lived her life. She was proudly independent, determined, and resilient. Never one to sit on the sidelines Carmen was all in on everything she did, often to the amazement of her wide circle of family and friends. Carmen was the consummate hockey mom cheering on her son and the Fergus Falls Otters. Teammates and other hockey parents are among her lifelong friends. She was an active hospice volunteer for Lake Region Hospice for 11 years, using her own life experience to connect with families in need of end-of-life support. Having achieved her own sobriety nearly 35 years ago, she supported others in their recovery from addiction. She was a 12-step sponsor to many young women and men in the Ottertail County area and was active in supporting the local AA community. Carmen was also tireless in her efforts to promote the importance of organ donation through LifeSource, frequently volunteering to do public speaking, sharing her own story and the stories of other transplant recipients she met over the years. More than her involvement in community and volunteer activities, Carmen will be most fondly remembered for the way she engaged with genuine interest and caring in her daily and ongoing interactions with nearly everyone she encountered; generous with her time and attention. Always quick with a wink, a smile, or a hug, an unexpected visit, or a call just to check in with someone she knew needed to hear a friendly voice. Carmen was a devoted mother to Justin, a loving sister, an adoring aunt, a beloved niece and a treasured friend to many. She will be dearly missed by her son, Justin Haas of Aspen, Colorado; siblings, Christeen (Gene) Borsheim of Wheaton, Chere (Ed) Rikimoto of Wheaton, Clay (Angela) Moser of Fayetteville, Arkansas, Candice (Tony) Hasbargen of Wheaton and John (Amora) Johnson, Portland, Oregon; nieces and nephews; great-nieces and nephews; aunts and uncles; cousins and a wide community of friends. Carmen was preceded in death by her parents and step-parents, William and Mabel Moser and Haldo and Melva Johnson. Memorials given will be sent to the University of Minnesota Foundation, by the family, to be used for transplant patient assistance in honor of Carmen. Celebration of Life: 11:00 a.m., Saturday, November 2, 2019 at Olson Funeral Home, Fergus Falls. Reception and fellowship to follow. Arrangements are provided by the Olson Funeral Home of Fergus Falls. Online condolences may be sent to www.olsonfuneralhome.com

The family of Carmen M Moser created this Life Tributes page to make it easy to share your memories.