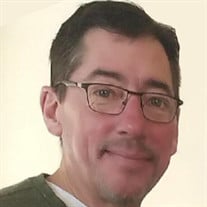 Carl Scott Burton, 56, passed away Wednesday, November 20, 2019, peacefully at home after a courageous fight with cancer. On June 1, 1963, Carl was born to John and Marilyn (Swanson) Burton in Lompoc, CA while his family was stationed at the Vandenberg Air Force Base. Carl attended Rothsay High School graduating in 1981, Wahpeton School of Science for Graphic Arts, and Detroit Lakes Technical College studying in the Culinary Arts Program. He married DiAnne Wahl in April 1986 and they had one son, Nick. On February 16, 1995, he married Jane Catherine (Ruppert) Johnson in Fergus Falls and she brought her two children, Travis and Tara. Together they raised their three children in Fergus Falls. Carl was a chef at The Depot in Erhard, Viking Café, Mabel Murphy’s, and at one time he was the Proprietor of the American Legion Post 30 Restaurant all in Fergus Falls. Most recently he was employed by Service Food in the Deli. He was a member at First Lutheran Church, Fergus Falls. He enjoyed golfing (he was especially proud of his hole in one), fishing, boating, bird watching, watching movies with his wife, and spending time with his grandsons - being called “Gramps”. His love for cooking was shown when he would feed loved ones whether it was grilling, smoking meats or being creative in the kitchen. He loved to travel. Carl is preceded in death by his mother, Marilyn L. Burton; brother, John Hudson Burton IV, and parents-in-law, Orville and Judy Ruppert. Carl is survived by his loving wife, Jane Burton of Fergus Falls; children, Travis (Katrina) Johnson, Tara Johnson both of Fergus Falls, and Nick (Vanessa Johnson) Burton of Fargo, ND; grandchildren, Zachary and Griffin Johnson; father, John Hudson Burton III, sisters-in-law and brothers-in-law, Diane Burton, Dennis Ruppert, Dean Ruppert, Lynn Solberg, Bill Ruppert, Brian Ruppert, Joe (Jamie) Ruppert, Hope (Benet) Schulz, and Tammy (Brandt) Johnson, and numerous nieces and nephews. Visitation: Friday, November 22, 2019, from 4:00 to 6:00 p.m. at the Olson Funeral Home in Fergus Falls and will resume one-hour prior to the service at the church on Saturday. Service: Saturday, November 23, 2019, at 2:00 p.m. at First Lutheran Church in Fergus Falls. Clergy: Reverend Gretchen Enoch Interment: First Lutheran North Cemetery, Fergus Falls Arrangements are provided by the Olson Funeral Home in Fergus Falls. Online condolences may be sent to www.olsonfuneralhome.com

Carl Scott Burton, 56, passed away Wednesday, November 20, 2019, peacefully at home after a courageous fight with cancer. On June 1, 1963, Carl was born to John and Marilyn (Swanson) Burton in Lompoc, CA while his family was stationed at the... View Obituary & Service Information

The family of Carl Scott Burton created this Life Tributes page to make it easy to share your memories.