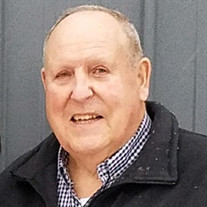 Calvin “Butch” Ben Simmer, 75, a resident of Fergus Falls, formerly of Rothsay, went home to be with Jesus unexpectedly on Friday, March 22, 2019 at Lake Region Healthcare in Fergus Falls. Butch was born on July 17, 1943 in Fergus Falls, MN, the son of Roquell and Florence (Danielson) Simmer. He attended country school in rural Rothsay and then went to high school in Breckenridge through 11th grade. As a senior he attended Rothsay High School and graduated in 1961. After high school, Butch worked on the family farm, until he entered the United States Navy in 1964. During his time in the Navy he served on the USS Forrestal and was honorably discharged in 1966 at which time he returned home and continued farming. On September 20, 1974, he married Joan K. Bredeson in Fergus Falls. They were blessed with 44 years of marriage and truly enjoyed doing everything in life together. The couple had three children, Julie, Amy and David. Butch continued to farm until his retirement in 2008, when David took over the farm operations. One of Butch’s greatest joys was helping David farm after he retired. In 2015, Butch and Joan moved off the farm and into Fergus Falls. Butch was a member of the Church of the Nazarene and served as a Sunday school teacher. Through the years he also served on the Akron Township Board and Rothsay School Board. Butch was a devoted family man, who loved the Lord. Faith, Family and Farming meant the most to him. His favorite times were spent with his family. He especially loved when his grandchildren rode in the tractor with him. He also enjoyed summers at the lake-he spent endless hours helping grandkids fish off the dock and he loved sail boating. He enjoyed reading, especially scouring cookbooks for new recipes, and perfecting his banana bread. Butch and Joan loved visiting with people. He enjoyed playing games and traveling. In his spare time, he enjoyed gardening, listening to polka and southern gospel music, and watching the RFD channel. Preceding him in death were his parents; brother, Roger and his father and mother-in-law, Eldore and Rose Bredeson. Survivors include his wife, Joan of Fergus Falls; children, Julie (Jason) Carlson of Fargo, Amy Simmer of Fargo, David (Laura) Simmer of Rothsay; six grandchildren, Alexa, Aubree, Jacob Carlson and Kellan, Kaylee, Nathan Simmer; brother, Vernon (Joan) Simmer of Rothsay and uncle Russ Marquardt of Rothsay. Also surviving are numerous nieces, nephews, cousins and extended family. Memorials are preferred to Burau Cemetery Fund or Wycliffe Bible Translators Visitation: 5-7 p.m. Thursday, March 28, 2019 at the funeral home with a public prayer service at 6:30 p.m. and resumes one hour prior to the service at the church. Service: 11 a.m. Friday, March 29, 2019 at the Church of the Nazarene, Fergus Falls. Clergy: Pastor Clay Mitchell Interment: Burau Cemetery, rural Foxhome, MN Arrangements provided by Olson Funeral Home in Fergus Falls, MN.

The family of Calvin "Butch" Simmer created this Life Tributes page to make it easy to share your memories.