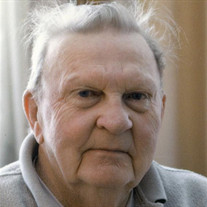 Burnett Bordson, 93, of Fergus Falls passed away on December 17, 2019, at PioneerCare Center in Fergus Falls. Burnett was born at the home farm in Elbow Lake Township on May 24, 1926, to Bennie and Caroline (Brevig) Bordson. He was their only child but grew up with many cousins who lived nearby. Burnett attended country school as a child and graduated from Elbow Lake High School in 1944. He was drafted into military service shortly after graduation. He was trained as a pharmacist’s mate by the US Navy. He took courses in Charleston, South Carolina and San Diego, California. He served onshore in Guam and Okinawa late in World War II. He returned to his parents’ farm in 1945. Burnett saved his military pay and in 1948 purchased his first 80 acres of farmland in Stonybrook Township. The land had long been in his mother’s family but was lost during the dust bowl era of the 1930s. He bought adjacent land that included a farmhouse shortly thereafter. Burnett married Arlene Anderson of rural Fergus Falls on December 7, 1952. They made their first home on his farmstead. They moved to Fergus Falls after their first son Allen was born in 1953. Their daughter Linda soon followed, but she was tragically taken from them in 1957 due to neuroblastoma. A second son, David, was born in 1960. Burnett worked at the Fergus Falls State Hospital for 28 years, retiring in 1984. He remained active on his farm with the assistance of the Myron family and Steven Bordson. He always considered himself first and foremost a farmer. Bowling was one of Burnett’s favorite hobbies. He and Arlene bowled together in league and tournaments. They passed their love of bowling to their sons. Bowling together was a common event during holidays when the adult children were home to visit. Burnett studied Norwegian after he retired. He quickly became proficient, having spoken the language as a small child. He spoke Norwegian often with his paternal relatives near Hegra, Norway. He fulfilled a great wish when the entire family visited the ancestral farm there in 2002. He is survived by his children, Allen (Carol) Bordson of Brooklyn Park, Minnesota and David Bordson of Saint Paul. He was preceded in death by his parents, Bennie and Caroline (Brevig) Bordson; wife, Arlene, and daughter Linda. His family loved him very much and he will be greatly missed. Visitation: One-hour prior to the service at the funeral home. Service: 11:00 a.m. Monday, December 23, 2019, at Olson Funeral Home in Fergus Falls. Clergy: Pastor Stan Satre Interment: Ness Cemetery, Elbow Lake, MN Arrangements are provided by the Olson Funeral Home in Fergus Falls. Online condolences may be sent to www.olsonfuneralhome.com

Burnett Bordson, 93, of Fergus Falls passed away on December 17, 2019, at PioneerCare Center in Fergus Falls. Burnett was born at the home farm in Elbow Lake Township on May 24, 1926, to Bennie and Caroline (Brevig) Bordson. He was their only... View Obituary & Service Information

The family of Burnett Bordson created this Life Tributes page to make it easy to share your memories.

Burnett Bordson, 93, of Fergus Falls passed away on December...