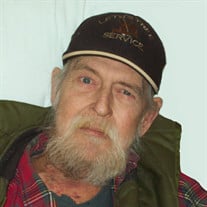 Bruce Curtis O’Neel, 70, of Fergus Falls, died Saturday, December 28, 2019, at the Good Samaritan Society in Battle Lake. He was born on June 8th, 1949 in Des Moines, Iowa, the son of Kenneth and Lois (Johnston) O’Neel. The family lived in various places, but Bruce’s formative years were spent in Wisconsin. He joined the US Navy on March 2, 1974, and was stationed in San Diego, CA, where he was a hospital Corpsman. He was discharged on January 6th, 1976. For many years, he worked for the US Army Corps of Engineers, working around the state with its’ dams and locks. Bruce then came to Fergus Falls where he supervised the operation at Orwell Dam. After retiring from there, he returned to Wisconsin where he became a Millwright and specialized in steam boilers and electric dynamos installation service and repairs. Later still he returned to Fergus Falls, to be near his friends and the out of door activities. In his free time, Bruce enjoyed reading out door magazines, hunting, fishing, and was an avid Green Bay Packer fan. People found him to be a handy-man and could fix just about anything. In addition, he enjoyed his involvement with and his many friends at the Fergus Falls Rifle and Pistol Club. He will be remembered as a kind and helpful man. Visitation: 5-7 p.m. Monday January 6th at the Olson Funeral Home, Fergus Falls, with a public prayer service at 6:30 p.m. Clergy: Reverend Jim Johnson Interment: National Cemetery, Fargo, North Dakota Arrangements: Olson Funeral Home in Fergus Falls. Online condolences may be sent to www.olsonfuneralhome.com

The family of Bruce O'Neel created this Life Tributes page to make it easy to share your memories.