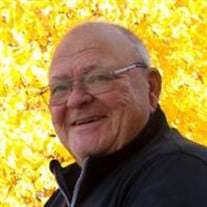 Reverend Bruce William Gunderson, 70, a resident of Fergus Falls, died Sunday, December 16, 2018 at his home under the care of LB Hospice. Bruce William Gunderson was born on November 17, 1948, in Williston, ND, to Arthur William and Mary Louise (McCabe) Gunderson. He attended Wilcox Country School and in 1966 graduated from Watford City High School. He furthered his education at Bismarck State College and Dickinson State University, graduating with a B.S. in Education, and a B.S. in Biblical Studies from Northwest Bible College in Minot, N.D. On December 27, 1968, Bruce married his high school sweetheart, Patricia (Patti) Skaar, of Watford City, ND. He held a variety of jobs in these early years including farming, construction and managing a lumberyard. Variety would maintain a strong presence as Bruce wore many hats throughout his life. Coinciding with the birth of his and Patti’s second child in 1975, Bruce had a personal encounter with the Lord Jesus Christ that left him forever changed. He began a personal relationship with Jesus that altered the course of his life. Bruce became a man of great faith with a sense of mission. Bruce entered into the ministry in 1977. He pastored the Messiah Community church of Watford City until 1993, including constructing the church building itself. He also taught science at Johnson Corners Christian Academy. He then pastored Golden Valley Assembly of God, once again undertaking a new church building construction project, and relocated the congregation to Halliday, ND. While pastoring there, Bruce also taught high school science classes and was elected mayor by a write-in vote, an office he proudly held until 2001. Bruce went on to pastor Bethel Chapel Assembly of God in Carrington, ND, for the next nine years. Here he also served as chaplain at Golden Acres Manor and aired a weekly radio ministry. In 2010, Bruce moved back to his hometown of Watford City, ND, where he served as Associate Pastor at Watford City Assembly of God, ministering to seniors and leading Bible studies. During that time, he also served as interim pastor at Crosby Assembly of God in Crosby, ND. Bruce retired in 2012, though he remained very active in ministry, leading Bible studies and serving as pulpit supply. Bruce and Patti moved to Fergus Falls, MN in 2014 where he also served as Associate Pastor at Abundant Life Assembly of God until the time of his death. Throughout his 40+ years of ministry Bruce filled pulpits as a camp speaker and Bible teacher, held evangelistic services all over the U.S. and Canada, participated in disaster relief and missions work, served on ministerial, community, and non-profit boards, served as a volunteer EMT, and held ministerial credentials with both the ND and MN District Councils of the Assembly of God. Family was of great importance to Bruce throughout his life, as was caring for children in need. Bruce and Patti raised nine children together - “the apple(s) of his eye” - including their youngest, Ashley, whom was adopted through foster care. Bruce and Patti faithfully served as foster and PATH parents for over twenty-four years, caring for over forty children and youth in their home during that span. The Gunderson household truly became unofficial family to many. Their home was a place of constant hospitality, and Bruce would keep guests well fed with his fantastic cooking. With a sharp mind and creative bent, Bruce remained a lifelong learner and creator. He was an avid reader, fascinated with history, science, and the arts. One could often find him working on a crossword puzzle. He enjoyed the challenge of imagining and building new things and had many a homemade chair, guitar, painting, quilt, song and a table to his name. He even built and remodeled many of the family’s homes over the years. Bruce also played guitar and was known to break out in song or whistle a happy tune at any occasion. In the summers Bruce enjoyed camping and gardening. He also loved to fish, which he especially enjoyed with his grandchildren. Traveling was another favorite pastime whether missional or adventurous. A few highlights were trips all across the United States, Nicaragua, Israel, Europe, and most recently India. Bruce was a visionary with big dreams and heart. His gregarious personality and ever-encouraging presence endeared him to many. His ultimate aim in life was to spread the gospel message, the hope of Jesus Christ, to anyone he encountered. Bruce was preceded in death by his parents; father-in-law and mother-in-law, Harold and Esther Skaar; son-in-law, Micky Barnica; brother-in-law, John Buckingham Survivors include his wife of 50 years, Patricia Gunderson of Fergus Falls; children, Julie Barnica of Isabel, SD, Heather (fiancé Clark Sinclair) of Grafton, WV, Jennifer (Rick) Wadholm of Ellendale, ND, Heidi (Eddy) Shannon of Fairview, MT, Joshua (Cindy) Gunderson of Bagley, MN, Amanda Morales of Fergus Falls, Jordan (Amber) Gunderson of Bemidji, MN, Amber (Trevor) Gerstmann of Fergus Falls, and Ashley Gunderson of Fargo, ND; grandchildren, Sarah and Seth Barnica, Brianna Oldaker and Michael Mugnano, Bryce (fiancé Michelle Langley), Abbigail, Cambria and Zoë Wadholm, Hailey Jo, Ricky, Jacob, Ali and Clara Shannon, William, Jesse and Mollie Gunderson, Kara, Kal-El, Xavier and Ripley Anne Morales, Katie, Thane, Braden, Coen and Brooklyn Gunderson, Aleythia, Henning, Aodhan and baby girl Gerstmann due Feb.1, 2019; brother, Eugene (Gayle) Gunderson of Watford City, ND; sister, Ardis (Robert) Pederson of Watford City, ND; sisters-in-law, Diane Skaar (Andy Freeman) of Tucson, AZ, Eileen Buckingham of Fargo, ND; brother-in-law, Brian Skaar (Bev) of Lakota, ND; and numerous nieces and nephews. Memorials preferred to the Gideons International or Abundant Life Assembly of God Church, Fergus Falls. Visitation: 5:00 PM – 7:00 PM Friday, December 21, 2018 at Olson Funeral Home with a public prayer service at 6:30 PM. Visitation will resume one hour prior to the service at the church. Service: 11:00 AM Saturday, December 22, 2018 at Abundant Life Assembly of God Church, Fergus Falls Burial: Oak Grove Cemetery, Fergus Falls Olson Funeral Home is in charge of arrangements. Condolences may be sent online at www.olsonfuneralhome.com

The family of Reverend Bruce William Gunderson created this Life Tributes page to make it easy to share your memories.