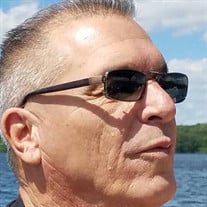 Brian K. Beck, 62, a resident of Fergus Falls, died Tuesday, March 19, 2019, at his home in Fergus Falls. He died with his beautiful wife by his side, where she has been for 33 years, up until his last breath. That morning the sky was smeared with the color of pale pink lipstick, like the song lyrics he had sang many times before. He was born on October 1, 1956, in Los Angeles, CA, to Chris and Marie (Baran) Beck. Brian had a love for music, that he passed onto all of his children. Brian was the lead singer in the band, Slash and The Personalities, and met his future wife, Stacy, after one of his concerts. On October 5, 1985, Brian married Stacy Singletary, poolside in Huntington Beach, California, on a beautiful sunny day. To this marriage, four children were born. Brian was a devoted husband, father and grandfather. He was happiest when surrounded by his family. He always said that his children were the biggest accomplishment of his life. Brian enjoyed reading, music, watching movies, his wife’s cooking and spending time with his family and dearest friends. Preceding him in his death was his mother, Marie, and his in-laws, Nancy Mascorro and Jim Singletary. Survivors include his wife, Stacy of Fergus Falls; children, Samantha (Kaleb) Beck Melton of Houston, TX, Dylan (Kenzie Jacobs) Beck of Fergus Falls, Eden (Christa Harper) Beck of Duluth, and Jaden Beck of Fargo; grandchild, Ruby Harper Beck; father, Chris Beck of Glendora; siblings, William (Barbara) Beck, Daniel (Carmen) Beck, Barbara (Paul) Blankenship, Chris (Kim) Beck, Stephen (Pam) Beck, Nikki (Steve) Templeton, and Danny (Janey) Beck; in-laws, Scott (Carmi) Singletary and Brad (Stacy) Singletary; numerous nieces and nephews and friends that were considered family. Visitation: 2:00 p.m. – 4:00 p.m., Friday, March 22, 2019 with prayers at 3:00 p.m. at Olson Funeral Home, Fergus Falls. Clergy: Reverend Doug Dent Following the visitation, you are invited to join the family at Mabel Murphy’s to continue the celebration of Brian’s life. Olson Funeral Home is in charge of arrangements.

Brian K. Beck, 62, a resident of Fergus Falls, died Tuesday, March 19, 2019, at his home in Fergus Falls. He died with his beautiful wife by his side, where she has been for 33 years, up until his last breath. That morning the sky was smeared... View Obituary & Service Information

The family of Brian K. Beck created this Life Tributes page to make it easy to share your memories.