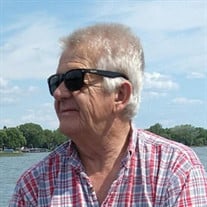 Bradley J. Lillemon, 64, of Fergus Falls, died Monday, November 15, 2021 at Lake Region Hospital in Fergus Falls surrounded by family. Brad was born November 26, 1956, to Gaynor and Lois (Enderson) Lillemon in Fergus Falls. He was the third of six children. He graduated from Fergus Falls High School in 1975. He was a member of First Lutheran Church, was baptized and confirmed there. Bradley married Rebecca Erlandson, his high school sweetheart, at First Lutheran Church in Fergus Falls in 1986, they later divorced. Together they were blessed with three sons, Jake, Joshua, and Joseph. In his younger years he played baseball, football, and hockey and was active in Boy Scouts. He was an avid outdoorsman. He had many passions that carried over into different jobs. Working at Dahl Music was a fond memory for him. Bradley drove trucks for SpeeDee Delivery for 34 years couriering goods throughout the Fergus Falls and surrounding area. He would rarely take a day off and his work ethic was unparalleled when it came to completing his daily tasks. Brad could fix anything and enjoyed restoration. He enjoyed NASCAR, watching sports and Wednesday night family dinners. He cherished time with his sons, his family, and watching his son’s sports activities. He had a love for his dogs (he called them his girls). Brad is preceded in death by his father, H. Gaynor Lillemon; his mother, Lois Lillemon; grandparents, Esther and Howard Lillemon and Emily and Lloyd Enderson. He is survived by his sons, Jake Lillemon of Beaverton, OR, Joshua (Maegan) Lillemon of Covington, LA, Joseph Lillemon of Fergus Falls; sisters, Debra (Jim) Ehlert, Clitherall, Kim (Duane) Hanson, Tamara (Mark) Anderson, brothers, Brian (Tracy) Lillemon and Patrick Lillemon all of Fergus Falls, and several aunts, uncles, cousins, nieces and nephews. Visitation: 11:00 a.m. to 1:00 p.m. Sunday, November 21, 2021, at the Olson Funeral Home in Fergus Falls Service: 10:30 a.m. Monday, November 22, 2021, at Olson Funeral Home in Fergus Falls, with visitation one-hour prior to the service. Clergy: Reverend David Strom He will be laid to rest near his father at Rock Prairie Cemetery in rural Elbow Lake. Arrangements are provided by the Olson Funeral Home in Fergus Falls. Online condolences may be sent to www.olsonfuneralhome.com

The family of Bradley Lillemon created this Life Tributes page to make it easy to share your memories.