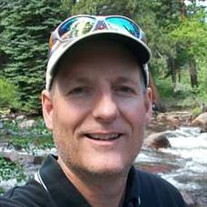 Bradley Beck, 55, of Fergus Falls, died Tuesday August 13, 2019, at the Broen Home in Fergus Falls. Brad was born November 7, 1963 to Edward Dean and Rita Marie (Cheviron) Willems in Decatur, IL. He attended grade school in Forsyth, IL and high school at Fargo South High in Fargo, ND. On September 6, 1986, he married the love of his life, Doreen Angela Rheault at St. Benedict’s Church in Horace, ND. Brad worked as an EMT from 1984-1985 and a paramedic for FM Ambulance from 1985-1986. He began his career with the United States Postal Service in January 1986 as a mail carrier in St. Paul, working his way up to Supervisor of Postal Operations in Albert Lea, MN from 1992-1994. From April 1994-1997, Brad served as Postmaster in Virginia, MN. Finally, he served as Postmaster in Fergus Falls from 1997 until his retirement on July 31, 2017. Brad loved his wife and children fiercely and wanted to protect them always. He was the ultimate prankster with a quick wit. He was always more than happy to open his home to friends and family (especially time around the backyard campfire). He loved fishing with his brothers-in-law, hunting pheasant with his lifelong friend, Bud Belk and golfing (poorly) with high school buddies, aptly named the “Clubhouse Rattlers”. He enjoyed woodworking, traveling and was an avid sports fan. His favorite players were always his own children; he rarely missed a game. A born leader and negotiator, Brad often worked his magic to fix or acquire things no one else could. Through his kind words and deeds, Brad always tried to help those in need. After 12 years of doctoring for an undiagnosed illness, he was finally diagnosed with MDS/MPN and went to the U of M for a bone marrow transplant in December 2018. He looked for the silver lining in every situation and remained positive through the entire transplant ordeal. After an eight-month battle to recover, he returned to his beloved home. Brad was a wonderfully unique, devoted family man who will be profoundly missed by many. He has left a lasting memory of Faith, Hope, and Love. He was preceded in death by his niece, Taylor Beck; step-father, Bob Willems; father-in-law, Raymond Rheault, and brother-in-law, Ron Rheault. Brad is survived by his wife, Doreen of Fergus Falls; children, Andy (Klara) Beck of Fergus Falls, Erin Beck of Fargo, and Ryan Beck of Fargo; mother; father and step-mother, Sue Beck; brothers, Mike (Barb) Beck, Pat (Janet) Beck, and Bryan Beck; step-sisters, Lisa (Mark) Kimmes and Jennifer Willems; step-brother, Sean (Chrisie) Knie, and numerous nieces and nephews. In lieu of flowers we would request donations be made in Brad's memory to the Lake Region Healthcare Cancer and Research Center or the American Cancer Society Hope Lodge - Minneapolis. Visitation: Sunday, August 18, 2019 from 2:00-4:00 p.m. at Our Lady of Victory Catholic Church in Fergus Falls, with prayer service at 4:00. Visitation will resume one-hour prior to the service. Mass of Christian Burial: Monday, August 19, 2019 at 10:30 a.m. at Our Lady of Victory Catholic Church in Fergus Falls Clergy: Father Alan Wielinski Interment: St. Benedict’s Cemetery in Horace, ND Arrangements are provided by the Olson Funeral Home in Fergus Falls. Online condolences may be sent online at www.OlsonFuneralHome.com

The family of Bradley "Brad" Beck created this Life Tributes page to make it easy to share your memories.