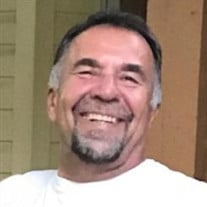 Billy “Bill” Johnston, 67, of Detroit Lakes formerly of Fergus Falls, died Monday, April 11, 2022, at Sanford in Fargo. Bill was born in Rolla, North Dakota on June 6, 1954, to Royce and Lilly (Haas) Johnston. As a young boy, Bill enjoyed living on his family farm and visiting relatives in the Rolla and Turtle Mountain areas. Many memories were made with his brothers and sister, cousins, grandparents, and aunts and uncles. Bill attended high school in Rolla and participated in wrestling, football, and even school plays. Along with his father and brothers, he enjoyed many hunting and fishing trips in Canada. After receiving his high school diploma, he enjoyed working at Bill’s Service with a handful of other guys named Bill. Bill was hired as a school bus driver and met a first-year sixth-grade teacher named Susan Paul who had recently relocated to Rolla from Minot. They had their first date at the ice-skating rink. They both knew it was love at first sight and this love has continued for 46 years. On February 12th of 1977, Bill and Sue were married in Hope, North Dakota. Bill enrolled at North Dakota State School of Science in Wahpeton and he and Sue were dorm parents while Bill was earning a degree in electrical technology. After graduation, Bill was hired by Otter Tail Power Company in Fergus Falls, Minnesota; he and Sue made Fergus their home for nearly thirty years. Their son, Matthew, was born in 1980 and Lucas followed in 1981. Bill loved the small-town life and his family has many fond memories of watching him play broomball, softball, and basketball. He was involved in many school activities such as PTO; he was also a supporter of the arts and coached a variety of sports. Bill always had a joke (often colorful), a kind word, and a story to tell. He loved cooking for his family and others which allowed him to make many treks to his favorite place, the grocery store. His homegrown wisdom was always on display and mostly on point. And his pickles, Bill’s Dills, are legendary. Bill and Sue were lucky to live in many other communities across Minnesota and finally settled in Detroit Lakes, where they could be close to their grandchildren and friends and family. Throughout the years, Bill shared his love of hunting with Luke and his sons. His nightly ritual of calling Mat kept the two of them busy with talk of books, movies, and whatever else was rattling through their minds. Bill cherished his grandchildren dearly and enjoyed car shopping with Kayden, watching Chase and Hayes play various sports, and taking his bonus grandson, Terrence, out on the town or the pontoon. In February of 2022, Bill suffered a stroke while recovering from a brain procedure. For nine weeks, he fought bravely to overcome the effects of this stroke and, despite his limitations, made as many new friends at the hospital as he would have if he’d been at a pool in Mexico. Bill is survived by his wife, Susan; his two children, Mat (Kirk) Johnston and their son, Terrence Powell; Lucas (Heather) Johnston and their three children Kayden, Chase, and Hayes; his mother-in-law, Dolores Berge; and his brother and sister, Neil (Sheila) Johnston and Mary Dawn (Terry) Steinwand, as well as many in-laws, cousins, and nieces and nephews. Bill was preceded in death by his father, Royce Johnston; mother, Lilly Johnston; brothers, Barry Johnston and Pete Johnston; father-in-law, Herbert Paul; step father-in-law, Gordon Berge; brothers-in-law, John Paul and Tom Paul; and sister-in-law, Paulie Paul. The family would like to thank the wonderful staff at Sanford Medical Center in Fargo for the compassionate care they showed Bill and his family over the past two months. Memorials preferred to Young Life-Otter Tail County. Visitation: 5:00 p.m. to 7:00 p.m. Tuesday, April 19, 2022, at Olson Funeral Home in Fergus Falls, with a Time of Remembrance at 6:30 p.m. Visitation will resume one-hour prior to the service at the funeral home. Funeral Service: 11:00 a.m. Wednesday, April 20, 2022, at Olson Funeral Home, Fergus Falls. Clergy: Pastor Jim Bjork Arrangements provided by Olson Funeral Home in Fergus Falls. Online condolences may be sent to www.olsonfuneralhome.com

The family of Billy Johnston created this Life Tributes page to make it easy to share your memories.