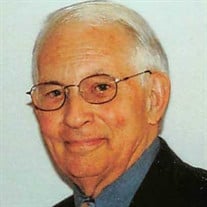 Donald William “Bill” Sampson passed away Monday evening, August 6, 2018, at the Pioneer home with his youngest daughter by his side. Bill was born Sept. 2, 1933, in Dallas, TX to Donald Sr. and Theresa Sampson. As a boy, Bill traveled with Apollo Boys choir, where his love for music began. After attending college in Denton, TX, Bill moved up north to Minnesota and continued his education at St. Cloud Teacher’s College. In 1951, he met the love of his life, Arlyss Larson, at an event they both sang at. They were married on April 23, 1955, in Brainerd, MN. After getting married, Bill and Arlyss moved to Virginia, MN where Bill worked for Mesabi Daily News. They had their first boy & girl, 12 months apart, then relocated to Fergus Falls. Bill opened Sampson Shoes, and a few years later they had another boy and another girl. Bill decided to go back to news and began his long career on the radio in 1963, at KOTE, KBRF and KJJK. His career came full circle when his working days ended after 14 years in the shoe department of Fleet Farm, when he retired at age 81. Bill belonged to First Lutheran Church in Fergus Falls, where he and Arlyss sang in the senior choir for many years. They lived in the same house for 53 years until Bill was moved to Pioneer Care. Through his family & faith, Bill always knew he had lived a truly blessed life. Bill is survived by his wife Arlyss, four children; Steve (Mary), Kay, Scott (ViAnn), Ann; 12 grandchildren, Angie (Chase), Missy (Pat), Phil, Joey, Stephanie, Josh, Justin (Margo), Jenny (Ed), Ryan (Heidi), Kristin (Erik), Adam & Arlonna; 12 great-grandchildren, Kylie, Ava, Carter, Olivia, Eleanor, William, Evalynn, Grady, Jude, Orion, Odin, Decker and a 13th due in December. He is preceded in death by one grandson, their beloved Joseph. Visitation: 5-7 p.m., Monday, August 13, 2018, with a prayer service at 6:30 at the funeral home and will resume one hour prior to the service at the church Service: 11 a.m. Tuesday, August 14, 2018, at First Lutheran Church, Fergus Falls Clergy: Rev. Gretchen Enoch and Chaplain David Strom Interment: First Lutheran North Cemetery, Fergus Falls Olson Funeral Home, Fergus Falls is in charge of arrangements Online condolences may be sent to www.olsonfuneralhome.com

The family of Bill Sampson created this Life Tributes page to make it easy to share your memories.