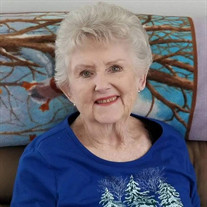 Beverly Kamstra, 84, of Fergus Falls, died Saturday, February 26, 2022, at LB Broen Home in Fergus Falls. Beverly Sue King, was born June 23, 1937, the daughter of Leonard and Jean (Wonacott) King in Buffalo, NY. She graduated from Downey High School in Downey, CA in 1955. After high school Bev worked at a bank until she became a full time Mom. On August 12, 1955, Bev married Wesley Kamstra in Norwalk, CA. She was a homemaker for the majority of her life, she stayed home to take care of four kids and was an amazing mother. Bev, Wes and their two kids moved from California to Minnesota in 1969 to be closer to Wes’ family. They moved to a hobby farm in Lake Park, MN and resided there for 26 years. After Wes retired, in 1996, they moved to a beautiful lake home on Little Pelican Lake. When the maintenance of the lake home got to be too much, they moved to Fergus Falls in 2005. She was a beautiful soul and had many friends and family that are going to miss her terribly. She was a great cook and baker. Anyone who visited her had a full stomach and great conversation. She took her job as a mother very seriously and raised four very capable kids. Bev worked at a chiropractic office in Detroit Lakes after all the kids were out on their own. She retired a couple years later. Her true calling was being the most caring Mom anyone could have asked for. Bev enjoyed bowling, quilting, sewing, needlepoint, anything artsy, gardening, her workouts at the YMCA and sitting with a dog or cat on her lap in the garage with Wes taking in the scenery and visiting with the neighbors. Preceding her in death were her parents, Jean and Leonard King; sister, Joyce (Johnny) Skrnich; daughter, Sally Ann Kamstra and her beloved cats Abby and Spunky and dog, Brandy. Bev is survived by her husband, Wesley Kamstra; children, Toni Kamstra Larson (Vereen), Jeffery (Denise) Kamstra, and Susan Kamstra; grandchildren, Jenna Johnson, Bailee Peterson, Sean Kamstra, Griffin Peterson, and Cole Larson; sister, Patricia (James) Larsen; Sam the cat, Jack the dog, and numerous family and friends. Visitation: 2:00 p.m. to 4:00 p.m. Saturday, March 5, 2022, at Olson Funeral Home in Fergus Falls, with prayer service at 4:00 p.m. Clergy: Reverend David Strom Arrangements provided by Olson Funeral Home in Fergus Falls. Online condolences may be sent to www.olsonfuneralhome.com

The family of Beverly Kamstra created this Life Tributes page to make it easy to share your memories.