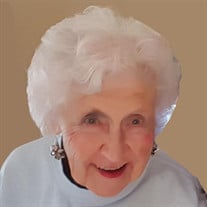 Betty L. Rovang, 92, of Fergus Falls, died Sunday, April 19, 2020, at PioneerCare in Fergus Falls. She was born on May 14, 1927, in Fergus Falls, MN, the daughter of Oscar and Ethel (Ness) Braaten. She was baptized and confirmed at the First English Lutheran church in Fergus Falls. Betty attended Adams Elementary in Fergus Falls and graduated from the Fergus Falls High School in 1945. While growing up, Betty and her sister Beverly helped out in the Corner grocery store on Alcott Avenue in the candy department. The store was owned and operated by their parents. Betty also enjoyed spending time during the summers at a cabin at Tanglewood Camp on Otter Tail Lake. On October 16, 1948, she married Allen Rovang at the First English Lutheran church in Fergus Falls. The couple moved to Fargo, ND where they made their home until 1953 when they purchased a small farm near Dalton, MN. Betty was employed by the Otter Tail County Probate Court working for Judge Frank Barnes until the couples first set of twins were born in 1957, followed by a 2nd set of twins born less than a year later and then a third baby in 3 years. Several years later, Betty returned to work for the County in the Auditor's Department for Voter Registration until her retirement in 1987. Following retirement, Allen and Betty sold the farm near Dalton and moved to the Hill Country near Kerrville, TX where they built a home and lived for five years until Allen's health began to fail and they moved back to Fergus Falls. Betty enjoyed flower and vegetable gardening, feeding and watching birds and raising her family. Her faith was very important to her and she was active in many church activities and functions as well. Allen and Betty were members of the Zion Sarpsborg Free Lutheran church in Dalton. Preceding her in death were her parents, Oscar and Ethel Braaten; her sister, Beverly (Rodger) Neumann; her husband, Allen, and brother-in-law, Charles Rovang. Survivors include four sons, Eric (Judi) Rovang of Otsego, MN, Kirk (Susan) Rovang of Spring, TX, Rolf (Bertie) Rovang of Plano, TX and Peter Rovang of Rice, MN; one daughter, Kirsten (Brian) Olson of Fergus Falls; one sister-in-law, Kathy Rovang of Dalton; five grandchildren, Samuel (Nicole) Rovang of Otsego, Jayme (Ted) Giese of Albertville, Sara (Justin) McLaughlin of Houston, TX , Kathryn Rovang and her fiance', Simpson Pham of Houston, TX and Andrew Olson of Minneapolis, four great-grandchildren and several nieces and nephews. A private family graveside service will be held. There will be a Memorial service held at a later date. Arrangements are provided by the Olson Funeral Home in Fergus Falls. Online condolences may be sent to www.olsonfuneralhome.com

Betty L. Rovang, 92, of Fergus Falls, died Sunday, April 19, 2020, at PioneerCare in Fergus Falls. She was born on May 14, 1927, in Fergus Falls, MN, the daughter of Oscar and Ethel (Ness) Braaten. She was baptized and confirmed at the First... View Obituary & Service Information

The family of Betty Rovang created this Life Tributes page to make it easy to share your memories.