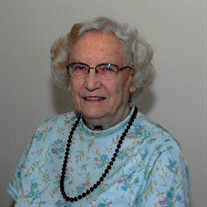 Berniece Esther Dalluge, 90, was called to her heavenly home on November 2, 2017, at Park Gardens in Fergus Falls under the care of Hospice. Berniece Esther Schoening was born on July 16, 1927, at home in rural Fergus Falls. She was the 3rd of three children born to Fredrick and Mathilda (Baumgarten) Schoening. She grew up on the family farm until she was 16 when she moved with her family into Fergus Falls. She was baptized and confirmed at Immanuel Lutheran Church and graduated from Washington High School in Fergus Falls in 1946. After graduation she worked as a waitress at Spic and Span where she met Merell “Bud” Dalluge on March 27, 1945. They were married on September 23, 1946, at Trinity Lutheran Church in Fergus Falls, where she remained a member. In December 1950 they moved to the Dalluge family farm in rural Fergus Falls where they lived until July 20, 2004 when they moved back into Fergus Falls. Berniece and Bud were blessed with four daughters: Beverly, Dianne and Delaine (twins), and Sharon. Berniece enjoyed raising chickens, gardening, reading, writing stories and driving the combine during harvest. She took great pride in working side-by-side with her husband to improve their farm. She made homemade bread which was a favorite to many people. Berniece had her loyal companion, Dusty, the family Toy Poodle, who was a real joy in her life, as well as the two wild ducks that she rescued, raised, and were spoiled by the whole family. Berniece enjoyed listening to music and watching movies. She loved her family and was a wonderful wife and a loving mother. She found great pleasure in spending time with her grandchildren and great-grandchildren, and also enjoyed playing a good competitive game of Scrabble with her sister, Gert. Berniece was preceded in death by her husband of 65 years who passed away on October 16, 2011; parents, Fredrick and Mathilda; sister, Gertrude Hermann; and her brother, Clarence, who died at the age of 2. Survivors include her four daughters, Beverly Runningen of Fergus Falls, Dianne (Thomas) Johnson of Mitchell, SD, Delaine (Mark) Anderson of Alexandria, Sharon Haugrud of Fergus Falls; six grandchildren, Dawn Savage of Burnsville, Nathan Runningen of Fergus Falls, Clinton (Stephanie) Johnson of Lennox, SD, Seth (Amber) Johnson of Sioux Falls, SD, Christopher (Erin) Haugrud of Ashby, and Paige Haugrud (Gunnar Kimber) of Kensington; eight great-grandchildren, John Runningen, Elijah and Micah Savage, Hadley and Raya Johnson, and Tyce, Crew, and Kael Johnson; as well as numerous other relatives and friends. Blessed be the memory of Berniece Dalluge. Visitation: One hour prior to the service at the funeral home Service: 1:00 p.m. Saturday, November 18, 2017, at Olson Funeral Home Chapel, Fergus Falls Clergy: Reverend Thomas Johnson Interment: At a later date at Knollwood Memorial Gardens, Fergus Falls Arrangements provided by the Olson Funeral Home in Fergus Falls. Online condolences may be sent to www.OlsonFuneralHome.com

Berniece Esther Dalluge, 90, was called to her heavenly home on November 2, 2017, at Park Gardens in Fergus Falls under the care of Hospice. Berniece Esther Schoening was born on July 16, 1927, at home in rural Fergus Falls. She was the 3rd... View Obituary & Service Information

The family of Berniece Esther Dalluge created this Life Tributes page to make it easy to share your memories.

Berniece Esther Dalluge, 90, was called to her heavenly home...