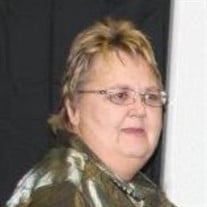 Bernice “Bernie” Constance Kugler, age 66, of Nashua, MN passed away Tuesday, January 18, 2022, at her home, under the care of Hospice of the Red River Valley of Fargo, ND. Bernice “Bernie” Constance Boek was born April 24 ,1955 in Fergus Falls to Kenneth and Eunice (Anderson) Boek. Bernie was baptized into the Lutheran faith with Barbara (Anderson) Norgren as her sponsor. Bernie took it upon herself to get confirmed at Trinity Lutheran Church, Fergus Falls with Reverend Knick officiating. She graduated in 1973 from Fergus Falls Senior High School. Wayne and Bernie were married June 22, 1974, at Immanuel Lutheran Church, north of Fergus Falls. Together Wayne and Bernie had two children, Stephanie and Lee. Bernie worked at Normandy Café in Fergus Falls and the Turkey Plant in Pelican Rapids. She and her family moved from Friberg Township to the hobby farm, “the biggest, little farm” in Nashua, MN. There they raised hogs, chickens, cattle, goats and quarter horses. Bernie did craft shows for many years, she loved meeting all the people. Bernie’s heart was into doing oil paintings and miniature doll houses, she always wanted to build one last house. She started to go to exotic livestock sales and horse sales which both got her into trouble with Wayne. Bernie and Wayne loved raising goats and horses. Babies was a special time of the year on the farm. It was a very sad day when Pacer, Bernie’s Palomino stud died at the age of 20 years old. Pacer was a pocket puppy. Bernie loved to spend time with her grandchildren fishing, cooking grandma eggs, but grandpa got carried away with asparagus. She loved to make up stories with the grandchildren as they road in the pickup. Bernie had one regret; she did not hug her kids enough. “I love you all, so let me go, I will always be with you.” Love Bernie Preceding her in death were her grandparents, Grandma “B” and Louie Bjorgo, and Hulda Boek; birth father, Kenneth Boek; father and mother-in-law, Ken (Fran) Kugler; father, Kenneth Wicklund; aunt, Barbara Norgren; brothers-in-law, Richard Kugler, Daryl Kugler, and James Kugler, and sister-in-law, Sherie Kugler. Bernie is survived by her husband, Wayne Kugler of Nashua; daughter, Stephanie (Tim) Schauderaff of Barnesville; son, Lee (Melissa) Kugler of Washburn, ND; grandchildren, Isaac, Autumn, Logan, Morgan, and Micah Schauderaff and Easton and Ever Kugler; step-grandchildren, Hannah and Hunter Feigum; mother, Eunice Wicklund of Colorado; sister, Mary (Thomas) Young of Colorado and Arizona; brother, Scott Wicklund of Colorado; special cousin, Dawn (Oly) Ard; brothers-in-law, Douglas (Terry) Kugler of Erhard and Dale Kugler of Fergus Falls; sisters-in-law, Linda Kugler of Fergus Falls, Verona (Steve) Bell of Council Bluffs, IA, and numerous nieces and nephews. Memorial Gathering: 5:00 p.m. to 7:00 p.m. Wednesday, January 26, 2022, with prayers at 6:30 p.m. at the Olson Funeral Home in Fergus Falls. Officiant: Pastor Randy Spahr Arrangements are provided by the Olson Funeral Home in Fergus Falls. Online condolences may be sent to www.olsonfuneralhome.com

The family of Bernice "Bernie" Kugler created this Life Tributes page to make it easy to share your memories.