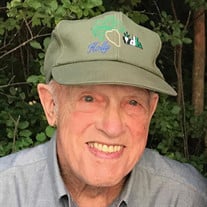 Bennie Roger Gerhardson, 91, of Fergus Falls, passed away Friday, April 10, 2020 at his family farm. Bennie was born in Fergus Falls, Minnesota on December 1, 1928, to Anton and Caroline (Nokleby) Gerhardson. Bennie lived his entire life on the family farm northeast of Fergus Falls, which has been in the Gerhardson family since 1870. Bennie graduated from the Fergus Falls High School in 1947, and he enlisted in the U.S. Army during the Korean War, serving in Europe. When he was home on leave, Bennie met the beautiful (Helene) Genevieve Fosse, who had moved from her home in Fertile, Minnesota, to teach second grade at Adams elementary in Fergus Falls. After completing his military service, Bennie returned to take over operations of the farm. He fell in love with Genevieve and they were married at Little Norway Church in Fertile on June 2, 1957. Bennie and Genevieve loved their farm life. They were proud of their dairy herd and their farmland, and they were very close with their neighbors, many of whom were operating farms of their own and raising children of similar ages. Bennie and Genevieve raised four children, and this got them involved with the school and other organizations, including the 4-H club, the Town and Country Saddle Club and the Homemakers Club. They were also involved in Bethlehem Church, of which Bennie was a lifelong member. Bennie and Genevieve gathered and celebrated regularly with special friends from their homemakers’ group and a group they called the New Year’s Eve gang. They also enjoyed the annual reunion of the Fergus Falls High School Class of 1947. In 1986, Bennie and Genevieve sold their dairy herd, and for about the next ten years Bennie worked as a rural trash collector for Waste Management and Denzel’s Region Waste. After that, Bennie worked as a caretaker of the Iverson Lake Rest Area just outside Fergus Falls on Interstate 94 eastbound. During his time working as a trash collector and at the rest area, Bennie and Genevieve continued to raise crops and cattle on their farm. Bennie loved to dance. He grew up during the big band era, and he and his friends attended dances at area pavilions and dance halls. While raising their kids, Bennie and Genevieve were members of the Town and Country Square Dance Club. Bennie always loved to ballroom dance at wedding receptions and at local VFWs and other clubs. He was an elegant dancer until the last couple years of his life. A few years ago, Bennie met Alice Landsgaard of Breckenridge, MN at a dance. Alice was a kind and encouraging friend to Bennie over the last several years. Bennie had a love for the outdoors, both for his work and for relaxing. He hunted ducks when he was young, and he hunted deer as he got older. Bennie and Genevieve loved camping throughout Minnesota and the Dakotas. They also enjoyed attending summer camps into their retirement age, with stays at Holden Village in Washington state, and Young Life Camps in Colorado and Minnesota. After selling the cows, Bennie and Genevieve travelled throughout the United States and internationally, including trips to Norway and Jamaica. They made several trips to see their daughter Beth in California and their son Brad in Massachusetts. They loved the adventure of travel. In 2018, Bennie participated in a Veterans Honor Flight to Washington, DC, where he was recognized for his Army service during the Korean War. Bennie was a life-long fan of the Fergus Falls Otters. He loved girls’ basketball and any sports, music or dance performances that included his grandkids. Bennie loved his kids and grandkids. He was proud of their achievements and excited for their adventures. Most of all Bennie loved time with friends and family. He loved coffee and conversation. He was happy when someone stopped by. He was a gentle soul. He smiled easily. He will be missed by his beloved family, his dear friends and the community of which he was so proud. Bennie is survived by two daughters Beth (Kevin) Walter of Aliso Viejo, CA and Bonnie (Rick) Denzel of Fergus Falls, two sons, Brad Gerhardson (Jennifer Lynch) of Chicopee, MA, and Bruce Gerhardson (Stefanie Thelen) of Fergus Falls, and nine grandchildren, Jonathan Gerhardson, Tyler Gerhardson, Maxwell Gerhardson, Chloe Gerhardson, Shannon (Kaleigh) Denzel-Bartok, Reece Denzel, Jack Gerhardson, Gustav Gerhardson and Dagny Gerhardson. Bennie’s first great grandchild is expected this summer. Preceding Bennie in death were his parents and his wife. Memorials are preferred to the Veterans Honor Flight of ND/MN. A private family service will be held. Arrangements are provided by the Olson Funeral Home in Fergus Falls. Online condolences may be sent to www.olsonfuneralhome.com

The family of Bennie R. Gerhardson created this Life Tributes page to make it easy to share your memories.