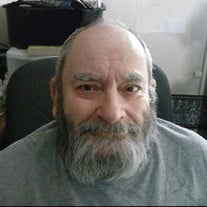 Benedict Frank Fontana Sr., 74, of rural Fergus Falls, passed Friday, May 18, 2018, at Battle Lake Good Samaritan Center, Battle Lake. He was born on September 24, 1943, in Chicago, IL, to Frank and Maria (Vitale) Fontana. Ben grew up and attended school in Chicago, Il. In 1960, Ben joined the United States Army and served in Vietnam. He was honorably discharged in 1968 after 8 years of service. In 1968, Ben returned to Chicago where he was employed as a chef. He was employed as a manager for Tandy Leather Co. in Arizona, Wyoming, and North Dakota. While in Fargo, ND, he met his wife-to-be, Crystal Neuman. They were married on May 28, 2005, in Dane Prairie Township, at Indian Lake. Ben was employed at Big Chief and for 13 years at the Holiday Station Store in Fergus Falls. He retired in 2008, and then helped out at the Fergus Falls Salvation Army Store. Ben was a member of the Fergus Falls VFW Post 612, Disabled American Veterans, and Our Lady of Victory Catholic Church in Fergus Falls. Preceding him in death were his parents, Frank and Maria; and one grandchild. Survivors include his wife, Crystal Fontana of Fergus Falls; son, Benedict “Ben” Fontana Jr. of Fergus Falls; daughter, Mary Fontana of Fergus Falls; step-son, Jason Bernard of Morton, IL; several grandchildren; one great-grandchild; two brothers and one sister. A Celebration of Life Service will be held at a later date. Assistance is provided by the Olson Funeral Home in Fergus Falls. Online condolences may be sent to www.OlsonFuneralHome.com

The family of Benedict Frank Fontana created this Life Tributes page to make it easy to share your memories.