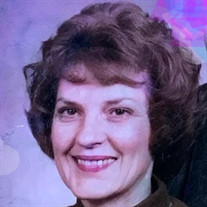 Barbara Ann (Harber) Lillquist passed away in her sleep the morning of April 28th, 2020. Barb had recently become a resident at the Emerald Crest Care Facility in Minnetonka, Minnesota. Barb was born May 10th, 1936 in Austin, Minnesota, the third of five children born to Leonard and Gertrude (Bagley) Harber. Barb spent her youth in Austin, graduating from Austin High School in 1955 and going on to earn her LPN degree from St. Olaf Hospital in 1957. On January 29th, 1959, Barb married Robert Kay Lillquist in Austin, and they were blessed with four children. Through the early years of their marriage, Barb and Bob moved around a bit. They lived in Sioux Falls, SD, Dubuque, IA, Mason City, IA, and Long Prairie, MN, before putting down roots in Fergus Falls in 1968. Barb took the occasional weekend shift at Lake Region Hospital during those first few years in Fergus, but ultimately, she stayed at home to focus on her children, who were always the most important thing in her life. After her kids had grown, Barb enjoyed working for Handley and Associates during the mid-1990's and fondly recalled Bob stopping at Handley on cold winter days to start her car so it was warm inside when she drove home. After Bob passed unexpectedly in 1996, life was never quite the same for Barb, and in 1997 she decided to move to the Twin Cities to be closer to her children and grandchildren. Much to the surprise of her kids, Barb not only adapted to life in the Twin Cities, she thrived. She could be tough when she had to be. Barb enjoyed working as a day-care aide during her time in the Cities as children delighted her to no end. Barb's love of children was nearly equaled by her affinity for animals, especially dogs and cats. Barb was preceded in death by her husband, Bob; her parents, Leonard and Gertrude Harber, and brothers, Dave Harber and Jim Harber. She is survived by her children, Tim (Leigh) Lillquist of Tower, Sandra (Mark) Donley of Rogers, Amy (Wade) Steigauf of Bloomington, and Dave (Ann) Lillquist of Eden Prairie; two brothers, Len (Elaine) Harber of Brainerd and Ron (Yvonne) Harber of Apple Valley; sister-in-law:, Sandy Harber-Guckeen of Austin; grandchildren, Don (Katie) Quinn III, Maggie Quinn, Laura Donley, Joe Donley, Luke Donley, Matthew Steigauf, Jack Steigauf, Cooper Lillquist, Josie Lillquist, and great-grandson Emmett Quinn. Due to the current health crisis, the funeral service will be a private family gathering. Please consider a donation made in Barb's name to the Ottertail County Humane Society, 1933 West Fir Avenue, Fergus Falls, MN 56537. Arrangements are provided by the Olson Funeral Home in Fergus Falls. Online condolences may be sent to www.olsonfuneralhome.com

Barbara Ann (Harber) Lillquist passed away in her sleep the morning of April 28th, 2020. Barb had recently become a resident at the Emerald Crest Care Facility in Minnetonka, Minnesota. Barb was born May 10th, 1936 in Austin, Minnesota, the... View Obituary & Service Information

The family of Barbara Lillquist created this Life Tributes page to make it easy to share your memories.

Barbara Ann (Harber) Lillquist passed away in her sleep the morning...