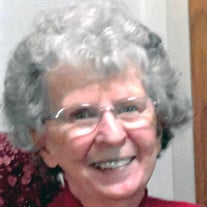 Barbara Devitt, 87, of Fergus Falls, died Friday, August 16, 2019 at PioneerCare in Fergus Falls. Barbara was born February 28, 1932, in Burlington, KS to Jesse and Amy (Newland) Bennett. As a child she moved to Gilbert, IA and attended school there, graduating in 1950. On June 4, 1961, she married Bill Devitt in Rockwell City, IA. Both Barbara and Bill taught school while in Rockwell City. She attended Buena Vista College and earned her Bachelor of Arts Degree in 1965. She and Bill resided in Humbolt, IA, La Port, IA, Lohrville, IA, Ankeny, IA, and in 2004 they moved to Fergus Falls. She worked as an Elementary Teacher, a housewife, at the Blood Center in Central Iowa, and retired in 1995. Barbara was a member of Grace United Methodist Church in Fergus Falls. She loved sewing, reading, and volunteering at the hospital, schools, and the Food Shelf. She was preceded in death by her father, Jesse; mother, Amy; four brothers, and one sister. She is survived by her husband, Bill of Fergus Falls; her children, Michelle (Deven) Nice of International Falls and Jeanette Devitt of Fergus Falls, and grandchildren, Brandon Nice and Aidan Devitt. Service: Tuesday, August 20, 2019 at 1:00p.m. at the Olson Funeral Home in Fergus Falls. There will be a visitation one-hour prior to the service at the Funeral Home. Clergy: Reverend Lee Kantonen Interment: Oak Grove Cemetery Arrangements are provided by the Olson Funeral Home in Fergus Falls. Online condolences may be sent online at www.OlsonFuneralHome.com

The family of Barbara Devitt created this Life Tributes page to make it easy to share your memories.