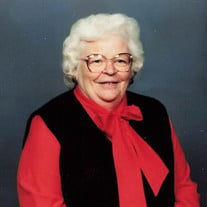 Arlis Lorine Myra, age 95, a resident of Fergus Falls, died Sunday, April 18, 2021, at LB Broen Home. She was born on July 25, 1925 in Grand Forks, North Dakota, the daughter of Oscar and Christina (Anderson) Jacobson. She attended grade school in Clearwater County, MN, District #20, Alvarado, MN and completed 8th grade at Clearwater (Pine Dale). Arlis attended two years of high school there and graduated in 1943 from Bagley High School. She went on to attend Business School in Duluth and began doing office work in Minneapolis at Kvalsten Electric where she worked for three years. On October 19, 1947, she married Earl J. Nelson in Clearbrook at the Lutheran parsonage. The couple resided in Bagley and then moved to Galesburg, N.D. and also Clearbrook and Minneapolis, where they lived for 11 years. In April of 1963 they moved to rural Erhard and in 1978 they moved into Erhard. Arlis worked for the Coop Creamery of Erhard as bookkeeper. She also worked at West Central Turkeys of Pelican Rapids. For 14 years she worked in various positions at the Erhard State Bank, retiring in January of 1989. Earl died on August 17, 1985. On February 4, 1989, she married Bertil G. Myra of Wisconsin at the Tonseth Lutheran Church. The couple resided in Erhard. Bertil died on June 18, 2000. She is a member of the Tonseth Lutheran Church where she served as treasurer and also the WELCA. She is a member of the American Legion Auxiliary Post #17 and the VFW Auxiliary Post #5252. Arlis also served as a 4H leader for many years. Her hobbies include quilting, oil painting, traveling, dancing, crossword and other puzzles. Preceding her in death were her parents; her husband Earl in 1985; her husband Bertil in 2000, as well as an infant son; two brothers, Dennis and Curtis Jacobson, and a step-son, Jim Myra. Survivors include her two children, James A. (Kathy) Nelson of rural Erhard and Linda (Larry) Schmelzer of Hibbing; five grandchildren and their children, Paul (Becky) Nelson and Owen, Eric (Kari) Nelson and Rachel and Ryan, Shari (Mitch) VerDorn and Justin and Lucas, Sara (Scott) Loss and Nina, and Debra (Jeff) Lu and Laura and Megan; step-children, John (Terry) Myra of Wisconsin, Jerry (Rosemary) Myra of Illinois, Michael “Mick” (Bonnie) Myra, Elizabeth “Betty” (Brian) Wood and Richard (Laurie) Myra all of Wisconsin; step-daughter-in-law, Brenda Myra; sister-in-law, Marlys Jacobson; numerous step-grandchildren and great-grandchildren along with numerous nieces, cousins, and friends. Memorials are preferred to Tonseth Church, Tonseth Cemetery or LB Hospice. Service: 2:00 p.m. Saturday, April 24, 2021, at the Olson Funeral Home in Fergus Falls. There will be a visitation one-hour prior to the service at the funeral home. Please refer to Arlis’ tribute wall for a link to the Live-stream of the service. Clergy: Pastor Jim Bjork Interment: Tonseth Cemetery, rural Erhard, MN Arrangements are provided by the Olson Funeral Home in Fergus Falls. Online condolences may be sent to www.olsonfuneralhome.com

The family of Arlis Myra created this Life Tributes page to make it easy to share your memories.