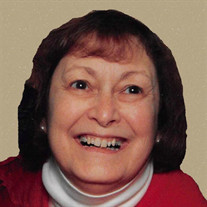 Arlene Mae Valerio, 76, of Fergus Falls, died Friday, April 12, 2019, at Hospitality House of Dayton Hollow, surrounded by people who loved her. She was born Jan. 6, 1943, in Wareham, Mass., to Ernest “Happy” and Mary (Ferreria) Valerio. She grew up in Falmouth, Mass., where she was baptized and confirmed at St. Anthony’s Catholic Church and attended Lawrence High School, graduating in 1961. She married Terrence Harrison Peyton in 1961, and the couple welcomed a daughter, Debbie, in 1962. In 1963, their son, Jeff, was born. A couple years later, the couple moved to Chicago, IL, and shortly after, they moved to Dougherty, IA. She was primarily a stay-at-home mom but worked at a couple grocery stores and the Green, IA, Locker Plant for a short time. In 1975, the couple moved to Fergus Falls, where the family attended First Baptist (now Crossroads) Church. She worked as a teller at Norwest Bank for several years. In 1985, she returned to her hometown on Cape Cod and worked at several banks. To further her education, she took and passed a medical coding course. In 1995, she moved to Fergus Falls to be near her grandchildren. She worked for several years at Herberger’s, and as a cashier and bingo caller at Walmart before retiring. She was preceded in death by her father and mother; her sister, Barbara, who died in infancy; a nephew, Derrick; surrogate parents, Gil and Stella Moniz; and various aunts, uncles, cousins and friends. Survivors include her daughter, Debbie Irmen; a son, Jeff Peyton (JoAnn Moniz) of East Falmouth, Mass.; her brother, Ernest (Sharon) Valerio of East Falmouth, Mass.; a nephew, Dwayne Valerio of Concord, NH; siblings, Billy (Linda) Moniz of Falmouth, Mass., Mary (Rob) Salzer of Amesbury, Mass., and Rosemarie Emmons of Raleigh, NC; grandchildren, Victoria Link of Moorhead, Ryan (Heather) Link of Barnesville, Cody Peyton of Wareham, Mass., and Dee (Warren) Oberg of Fergus Falls; three great-grandchildren, Morgan, Grayson and Layla Link; and many other family and friends. A memorial gathering is planned from 5 to 7 p.m. Tuesday, April 16, at Olson Funeral Home in Fergus Falls. No formal service is planned. Arrangements are provided by the Olson Funeral Home in Fergus Falls, MN

The family of Arlene Valerio created this Life Tributes page to make it easy to share your memories.