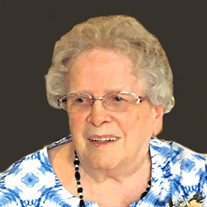 Arlene Grage, 93, of Fergus Falls, died on Saturday, September, 7, 2019, at PioneerCare in Fergus Falls. Arlene Jeanette Knutson Grage was born March 25, 1926, to Thomas and Alma (Ohren) Knutson in rural Dalton. She graduated from Northwest State Agriculture School in Crookston. On November 10, 1946, she married Donald Grage at Zion Lutheran church in Dalton. She worked in her home as a babysitter for 19 ½ years. She enjoyed each and everyone so very much. Arlene opened a clothing store at the mall called, Aunties Small World. She had this business for five years. She continued watching children in her home for another ten years. Arlene and Don were active with taking wedding pictures and also attended Bible studies with great friends. She was a member of First Lutheran Church in Fergus Falls and was active in the Homemakers, Ladies Aide, and Circle through the years. She enjoyed spending time with her family. Her granddaughters, Angie and Amy, enjoyed time with their grandma and often would accompany her on numerous shopping trips. She was preceded in death by her husband, Donald; parents, Thomas and Alma; five siblings who died at birth; a brother, Jarl, who died as an infant; a sister, Grace, and three brothers, Lester, Carlton, and Alton Knutson. She is survived by a son, Mark Grage of Fergus Falls; a daughter, Mary (Daniel) Gerber of Fergus Falls; two granddaughters, Angela (Kelly) Manley of Braham and Amy (Ananias) Garrison of Fergus Falls; three great-grandchildren, Logan, Lily, and Josiah; a brother, Jarl (Glenice) Knutson of Princeton; along with numerous nieces, nephews, and in-laws. Visitation: Friday, September 13, 2019, from 5:00 to 7:00 p.m. at the Olson Funeral Home in Fergus Falls Service: Saturday, September 14, 2019, at 11:00 a.m. at the Olson Funeral Home Chapel Clergy: Reverend Stan Satre Interment: First Lutheran North Cemetery in Fergus Falls Arrangements are provided by the Olson Funeral Home in Fergus Falls. Online condolences may be sent to www.olsonfuneralhome.com

The family of Arlene Grage created this Life Tributes page to make it easy to share your memories.