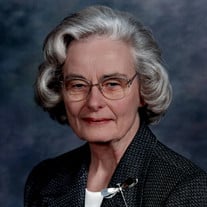 Arleen DeLoris Nycklemoe, 88 formerly of Fergus Falls, passed away on Wednesday, August 29, 2018, at St. Patrick Hospital, Missoula, MT of natural causes. She was born on April 9, 1930, in Fergus Falls to Elmer and Emma Fick. Arleen was raised and educated in Fergus Falls. She graduated from Moorhead State University with a Teaching Certificate. In school she was a member of the band, orchestra and the school paper. Arleen loved music and helped her father with his ‘Fick’s Happy Ramblers’ band who played at the State Hospital every Saturday night. On December 29, 1951, she married Paul Nycklemoe and was married for 46 years. They lived in Fergus Falls the majority of their life together, but also lived in Minneapolis, Indiana and Colorado while Paul served in the military. Arleen was an active member of the Sons of Norway, Bethlehem Lutheran Church and volunteered for many other organizations such as the Food Shelf and Ottertail County Museum. She served on the Minnesota State Board of Junior Colleges. Arleen enjoyed traveling, sewing, playing bridge, gardening and dancing. Even in her later years, you could see her feet doing the twostep under her chair when she heard a polka. Arleen was preceded in death by her husband Paul, parents Elmer and Emma Fick and sister, RoAnn Hanson. Survivors include: two daughters and their families, Susan Guest (Jim) Missoula, MT and Karen Anderson (Mike) Maple Grove, MN; five grandchildren and two great-grandchildren. Memorial donations in memory of Arleen may be made to: Fergus Fall Food Shelf, Ottertail County Historical Society or Bethlehem Lutheran Church. Visitation: Sunday, September 16, 2018, from 1:00 to 3:00 pm at the Olson Funeral Home and will resume one hour prior to the service at the church Service: Monday, September 17, 2018, at 2:00 pm at Bethlehem Lutheran Church, Fergus Falls followed by a reception. Clergy: Rev. Jake Anderson Interment: Bethlehem Cemetery, Fergus Falls Olson Funeral Home, Fergus Falls is in charge of arrangements online condolences may be sent to www.olsonfuneralhome.com

The family of Arleen Nycklemoe created this Life Tributes page to make it easy to share your memories.