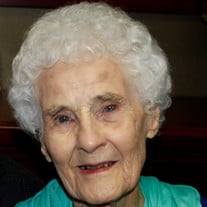 Ardis Anderson, age 99, formerly of Fergus Falls, entered her eternal home on Wednesday, October 16, 2019, at Edgewood Assisted Living in Blaine, MN. Ardis was born in Onalaska, WI, on April 6, 1920, the thirteenth of sixteen children born to Sam and Lillie Severson. She was the last of the 16 to die, marking the end of a remarkable generation but leaving behind those who will continue the traditions of mutual support and caring that the family embodied. Ardis graduated from Onalaska High School in 1938 and married David Anderson from Elbow Lake, MN, on June 6, 1943. They celebrated almost 74 years of marriage (lacking 2 months). Ardis was preceded in death by her parents, Sam and Lily Severson; husband, David; her oldest grandchild, Todd Larson; son-in-law, Mark Munckton, as well as 8 sisters and 7 brothers and many aunts and uncles. Ardis is survived by her five children and four of their spouses, Joan (Doug) Maynard of Madison, WI, Carol (Dan) Larson of Northfield, MN, Diane Munckton of North Topsail Island, NC, Renee (Rod) Martin of Blaine, MN, and David (Denise) Anderson of Fergus Falls; 11 grandchildren; 20 great-grandchildren; 2 great-great grandchildren; brother-in-law, Gerald (Marlys) Anderson of Baudette, MN, plus many nieces, nephews and also many friends who have loved her dearly. At the age of 19 she became a born again Christian and lived her life in such thankfulness and love because of what Jesus had done for her. She didn’t just talk her faith, she lived it. After their marriage, Ardis and David followed David’s parents, Mary and Victor Anderson to the west coast, working in Utah, Washington, and California, where David worked as a brick layer and cement finisher. They returned to David’s Minnesota hometown in 1950 having added to their union two daughters, Joan and Carol. In 1955 they moved into their first home on West Lincoln Avenue in Fergus Falls, a home that David had plastered skillfully and beautifully after forming his company for doing this type of work. To this home they brought two more daughters, Diane and Renee and 8 ½ years later a son, David. Their oldest daughter was about ready to graduate from High School when they had finally gotten their boy! Ardis, was first and foremost a full-time mom and homemaker; however, she did supplement their income by working a short time at Service Food and she also became a Tupperware dealer. When David was 5 years old, Ardis found herself coaching his T-ball team, as no one else would do it. Every child on that team got to play, no matter what. Ardis was a member of First Baptist Church in Fergus as well as an active member of the Gideon’s International Auxiliary. She was a wonderful neighbor and always a friend to anyone she met. She was utterly unafraid about talking to strangers, especially if they had babies or small children and was never ashamed of telling them about her best friend, Jesus. She enjoyed playing games of ROOK and such, with friends and if no one else was available, with her husband. In the past few years she played hundreds of games of Dominos with her daughters. She was loving, friendly, kind, always concerned for others (especially in making sure they were well fed), and sentimental. She had the most tender heart. She could cry daily watching her favorite TV programs, “Queen for A Day,” or “The Price is Right” and once even won $50 answering a question from a local radio station. With those winnings, she bought her first set of china. Ardis and Dave spent many years living at their Stalker Lake home after selling their home in Fergus. While living on the lake she learned to golf and did remarkably well given her age and inexperience. When it was time to move to town, because the lake was getting to be too much work, they were informed that their former Lincoln Avenue home was up for sale. They made the purchase and moved back to “town” once again, enjoying the beauty of David’s unharmed plastered walls that had stood the test of time. She and David enjoyed their church activities, friends and family visits. They always welcomed unannounced “drop-in” guests and extended the arm of friendship to many friends, neighbors, relatives and even newcomers to their church and community. Travelling to Sweden was a highlight of their later years. They also enjoyed wintering in Arizona for a few years, driving down in their motor home. Ardis lived a full life as a daughter, sister, wife, mother, mother-in-law, grandparent and friend. Those who knew and loved her will feel the void she leaves. In lieu of flowers, donations may be made to The Gideon’s International, Fergus Falls chapter or Allina Hospice, 1055 Westgate Drive Suite 100-MR34100, St. Paul, MN 55114. Special thanks to Edgewood Memory Care for taking such good care of her and also to Allina Hospice. Both were exceptional in helping with her every need. Thanks also to all who sent cards and were able to visit her in these final days. She loved people. She LOVED Jesus. Visitation: 9:30 a.m. – 11:00 a.m., Friday, October 25, 2019 at the church Funeral Service: 11:00 a.m., Friday, October 25, 2019 at CrossRoads Church, Fergus Falls, MN Clergy: Rev. Bruce Nelson Interment: Union Cemetery, Elbow Lake, MN Arrangements provided by Olson Funeral Home, Fergus Falls. Condolences may be sent online at www.olsonfuneralhome.com

The family of Ardis Myrtle Anderson created this Life Tributes page to make it easy to share your memories.