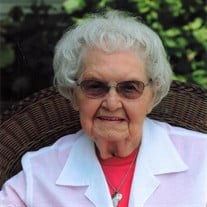 Annie Laurie (McEachern) Torgerson, 94, of Fergus Falls, died Sunday, October 31, 2021, at PioneerCare in Fergus Falls. Annie was born March 22, 1927, to Murdock and Annie (Scott) McEachern in Homestead, MT. She was baptized, had her first communion, and was confirmed in St. Patrick’s Church in Medicine Lake, MT. She attended Medicine Lake School. As a child Annie lived in Medicine Lake, MT with the exception of one year in Hot Springs, SD. At the age of 17, she moved to Hannaford, ND to help a family friend run a café. It was there she met her husband, Kermit and got married in Cooperstown, ND at the age of 18. A son Leslie was born to them in 1946. They lived and worked in Northfield, MN for a short time but eventually moved back to ND where they lived in various communities (Hannaford, Fingal, and Mercer) until settling in Bismarck, ND in 1951. Their daughter Becky was born to them in 1953. In 1966 they moved to Elgin, ND where they owned and operated a grocery store until 1972 when they moved back to Bismarck. In 1989 they moved to Appleton, MN to be closer to their family. Kermit died in 2015 and Annie moved to Fergus Falls with her daughter Becky in 2016. She lived with her daughter, then Mill Street Residence, and finally PioneerCare Center. Annie worked as a waitress at many supper clubs throughout her life. She also owned and operated a paper supply company while living in Bismarck, ND. Annie’s greatest joy in life was cooking for her family. She also enjoyed crocheting and knitting. She loved sports, especially the MN Lynx Basketball team, and she loved watching her children and grandchildren in their sports and activities. Preceding her in death were her parents; three brothers, John, Bennie, and Willard; three sisters, Lillian Aitken, Mary Vaught, and Iva Mayhew, and a son-in-law, Charles Brown. Annie is survived by her children, Leslie (Marcia) Torgerson of Bradenton, FL and Rebecca Brown of Fergus Falls; grandchildren, Susan (Clark) Christianson of Glencoe, Stephanie (Stacy) Krusemark of Madison, SD, Bridget (Nick) Leonard of Fergus Falls, Kelsey Brown of St. Paul, Megan (Ryan) Zigler of Fergus Falls, and Katie Brown (Luke Nelson) of St. Paul; great-grandchildren, Jacob and Brooklyn Christianson, Kaden and Kylie Krusemark, Louis, Maggie, and Claire Leonard, Zac, Henry, and Logan Zigler, and Luna and Fiona Brown Nelson; sister-in-law, Beverly Torgerson, and many nieces and nephews. Visitation: one hour prior to the start of the service at church Mass of Christian Burial: 10:30 a.m. Monday, November 8, 2021 at Our Lady of Victory Catholic Church in Fergus Falls Clergy: Father Patrick Hoeft Interment: Appleton Cemetery in Appleton, MN Assistance provided by the Olson Funeral Home in Fergus Falls. Online condolences may be sent to www.olsonfuneralhome.com

The family of Annie Torgerson created this Life Tributes page to make it easy to share your memories.