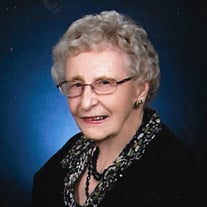 Alpha Mahler, 97, of Gresham, OR, formerly of Fergus Falls, MN, died Thursday, September 27, 2018 in OR. Alpha was born January 24, 1921 on her family farm near Hankinson, ND, to George and Minnie (Westphal) Stach. Growing up, she loved roaming nearby sand hills, where she was inspired to write poetry. She much preferred helping her father work outdoors instead of doing housework. When she was 15, her mother became terminally ill, and Alpha left school to take care of the household and younger siblings, and to provide hospice care for her mother. Following her mother’s death in 1937, her family moved to a farm near Mantador, ND. Alpha met Robert (Bob) Mahler, her father’s farmhand, and they were married on November 22, 1943. They had their first child, Dean, shortly before Bob's Army discharge in 1945 and then took over her father's farm, and had four more children – Cyril, Jerry, Jo, and Gayle. She and Bob were 4-H leaders, and led the development of a local Farmers Union branch. They also became avid square dancers. In 1961 they moved to Fergus Falls, where Alpha attended cosmetology school. She loved being a hairdresser. Alpha volunteered to provide and teach hair care to women clients at the sheltered workshop and residents at the local state psychiatric hospital. Alpha later developed debilitating reactions to hairdressing chemicals. Always one to not let setbacks keep her down, she was hired to sell shoes at O'Meara's department store, and soon was promoted to assistant manager. She continued doing this until she was disabled at age 53 following brain surgery and stroke. In the 1970s, she and Bob began helping a Vietnam refugee obtain medical care and integrate into the Fergus Falls community. For nearly two decades they frequently shared meals and included her in all extended family events. Alpha was very active with Ladies’ Aid at church, and created the first Sunday School class in the area for children with intellectual development disabilities. She and Bob were very dedicated food shelf volunteers. In 2014, Alpha moved to the Portland, Oregon area to be near her daughter, Jo, and cousin, Beatrice. Alpha was loved and admired by caretakers at her senior day center there, where she eagerly participated in activities, and discovered a talent for creating acrylic paintings of outdoor scenes. In addition to helping others, Alpha loved being in nature, playing cards, reading, music and dancing, baking, and doing arts and crafts. Alpha’s indomitable spirit was an inspiration to all who knew her. She will be sorely missed. Preceding her in death were her parents; twin sons, Cyril and Jerry; husband, Robert; brother, George; a niece and three nephews; and numerous in-laws. Survivors include son, Dean (Veronica) of GA; daughters, Jo Mahler of OR and Gayle Mahler (Scott Simpson) of UT; sister, Doris Thomas of WI; grandson, Michael (Kelly) Mahler; great-grandson, Connor all of GA; and 47 nieces and nephews. Visitation: One hour prior to the service at Trinity Lutheran Church, Fergus Falls Memorial Service: 1:00 p.m. Friday, October 19, 2018 at Trinity Lutheran Church, Fergus Falls, MN Clergy: Rev. John Christensen Interment: Trinity-Faith Cemetery, Fergus Falls, MN

Alpha Mahler, 97, of Gresham, OR, formerly of Fergus Falls, MN, died Thursday, September 27, 2018 in OR. Alpha was born January 24, 1921 on her family farm near Hankinson, ND, to George and Minnie (Westphal) Stach. Growing up, she loved... View Obituary & Service Information

The family of Alpha Mahler created this Life Tributes page to make it easy to share your memories.