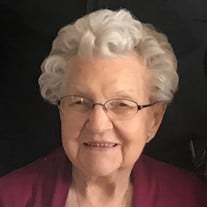 Alice Fay Gehrke, 92, of Fergus Falls, died Sunday, February 17, 2019, at Pioneer Pointe, Fergus Falls, under the loving care of LB Hospice. Alice was the youngest of five girls, born to Walter and Della (Bullis) Ash, on April 24, 1926, in Lawrence Township. From a very young age she had two loves – Jesus Christ and Alvin (Bud) Gehrke (the neighbor boy). She attended country school and graduated from Fergus Falls High School in 1944. She attended the University of Minnesota and received her RN degree through the U.S. Army Nurse Corps. On October 8, 1949, Alice married her best friend, Bud. To date, as far back as records show, they hold the record for both being born, raised, married and still members of Lawrence Presbyterian Church. To this marriage were born four children, Robert (Pat) Gehrke, Fay (Tom) Ulrich, Dan (Dawn) Gehrke and Curt (Susie) Gehrke. They were blessed with 13 grandchildren; 36 great-grandchildren; one great-great grandson and daughter-in-love, Geneva Gehrke. Alice worked at Minneapolis General Hospital, St. Lukes and Lake Region in Fergus Falls. She retired from nursing in 1988. She was an active member of the Gideons International for many years. She took every chance given, to share her Lord with others. She always felt you should, “Bloom where you were planted”. Alice and Bud lived at their farm for 34 years, then moved to their home of 32 years, at River Oaks. In August of 2016, they moved to Pioneer Pointe. There they found a new family to love, laugh and fellowship with. In Alice’s last days, she was blessed to be loved and cared for by Hospice. Along with her parents, Alice was preceded in death by her four sisters and in-laws. Alice is survived by her husband, Alvin (Bud) of 69 years; children; grandchildren; great-grandchildren; great-great grandson and daughter-in-love. Visitation: 12:30 p.m. – 2:00 p.m. Friday, February 22, 2019, at the Olson Funeral Home, Fergus Falls. Service: 2:00 p.m., Friday, February 22, 2019, at the Olson Funeral Home Chapel, Fergus Falls, MN Clergy: Reverend Kevin Patch Interment: Spring of 2019, Lawrence Presbyterian Cemetery, Wendell, MN Arrangements are with the Olson Funeral Home in Fergus Falls. Online condolences may be sent to www.OlsonFuneralHome.com

The family of Alice Fay Gehrke created this Life Tributes page to make it easy to share your memories.