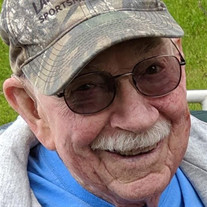 Albert (Sonny) Thiel, 95, of Fergus Falls, died Saturday November 16, 2019, at Lake Region Healthcare in Fergus Falls. It is with great sadness and greater love, we say our goodbyes to our Dad, our Grandpa, and our Great-Grandpa. Albert was born March 6, 1924, to Nicholas and Margaret (Mueller) Thiel in Mantador, ND. From 1942 to 1946, he was a member of the Merchant Marines, serving in WWII. He was discharged from the 164th Infantry of the North Dakota National Guard in 1951. On January 16, 1948, he married Lois Starin at St. John’s Catholic Church in Wahpeton, together they celebrated more than 63 years of marriage. In early years, he worked for AT&T. He started his career with Burlington Northern Railroad in 1950 and continued working there until his retirement in 1987. He lived in Moorhead, retired to East Lost Lake, and most recently in Fergus Falls. He was a member of the Fergus Falls VFW, the Underwood American Legion, NARVRE (Railroad Retirees), and Lake Country Sportsmen’s Club. He was also a member of St. James Catholic Church in Maine. His greatest joy in life was his family, he took extreme pride in all their accomplishments. Albert was an avid gardener, hunter, fisherman, wood worker, lover of birds (not squirrels), and nature. He was preceded in death by his parents, Nicholas and Margaret; his beloved wife and fishing partner, Lois; brothers, Aldon (Bud), Melvin (Mel), and Gilbert (Gil); sisters, Arleen (Sis), Joan, Elizabeth (Dolly), Donna and sisters and brothers-in-law. Albert is survived by his three sons, Michael (Karen) Thiel of Moorhead, Gary (Diane) Thiel of Moorhead, and Lyndon (Betty) Thiel of Laurel, Montana; two daughters, Brenda (Daryl) Lund of Richville and Tanya Thiel Kavanaugh of Fergus Falls; 13 grandchildren; 17 great-grandchildren and number 18 on the way; brother, Nicholas (Nick); five sisters-in-law; numerous nieces and nephews, and a vast amount of friends. Memorials are preferred to St. James Catholic Church or the local food shelf. Visitation: Thursday November 21, 2019 from 5:00 to 7:00 p.m., with a prayers service at 6:30 p.m. at the Olson Funeral Home in Fergus Falls. Service: Friday November 22, 2019, at 11:30 a.m. at the St. James Catholic Church in Maine Clergy: Father LeRoy Schik Interment: St. James Cemetery, rural Underwood, Minnesota Arrangements are provided by the Olson Funeral Home in Fergus Falls. Online condolences may be sent to www.olsonfuneralhome.com

Albert (Sonny) Thiel, 95, of Fergus Falls, died Saturday November 16, 2019, at Lake Region Healthcare in Fergus Falls. It is with great sadness and greater love, we say our goodbyes to our Dad, our Grandpa, and our Great-Grandpa. Albert was... View Obituary & Service Information

The family of Albert Thiel created this Life Tributes page to make it easy to share your memories.