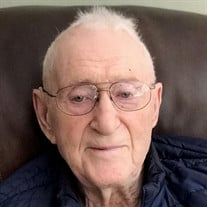 Albert Robert Long, 97, a resident of Fergus Falls, died Friday, July 19, 2019 at the MN Veterans Home. He was born in LaMoure, ND on April 18, 1922, to William (Bill) and Christine Long. On October 29, 1942 he enlisted in the U.S. Navy. He was a Ships Cook First Class. He served in Great Lakes, IL, Ports Mouth, VA, Little Creed, VA, Fort Pierce, FL, and Miami, FL. He was honorably discharged on October 31, 1945. Albert met his wife, Grace, through her brother Richard, who served in the Navy with him. He would visit her family in Georgia while on leave. The two dated for a year. After Albert was discharged, he went to barber school in Fargo. He left Grace in Georgia while “He made something of himself.” He worked as a barber for awhile and then put his cooking skills to work when he opened a small café in Verona, ND. He would serve as many as 50 homemade dinners on Sundays. He went back to Georgia and on May 21, 1949, he married Grace. They lived in Georgia a short while before he brought his bride back to the plains of North Dakota. They ended up settling in Fergus Falls in 1953, where they made their home for many years. They were longtime members of First Lutheran Church, where Albert helped with many church dinners. He worked as a master electrician until he retired in 1988. He enjoyed gardening, hunting, fishing, spending time with his grandchildren, and helping others. He is preceded in death by his parents, Bill and Christine Long; his wife of 67 years, Grace; brothers, Adolph, Jerome, Edward, and Kenneth; sister, Clara Lind; brother-in-law, Elmer Lind; sister-in-law, Virginia Long and grandson, Taylor Long. Albert is survived by his son, Bob Long of Fergus Falls; daughter, Cindy (Rick) Kressin of Breckenridge; four grandchildren, Katelynn Kressin, Paige Cook, Jack Kressin, and Ashley (Matt) Schleske, and five great-grandsons. Visitation: One hour prior to the service at the church Memorial Service: 1:00 Friday, July 26, 2019 at First Lutheran Church in Fergus Falls Clergy: Reverend Stan Satre Interment: Burial will be at a later date. Arrangements with the Olson Funeral Home of Fergus Falls Online condolences may be sent to www.OlsonFuneralHome.com

The family of Albert Robert Long created this Life Tributes page to make it easy to share your memories.