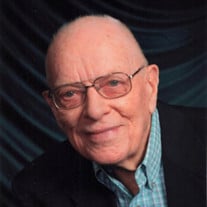 Albert Norman Hexum, 94, of Fergus Falls, died Thursday, October 28, at his home surrounded by his family. Al Hexum was born January 18, 1927, to Albert and Olga (Sethre) Hexum on the home farm near Carlisle, MN. He graduated from Fergus Falls High School in 1943. After high school he returned to farm with his dad, brother, and an uncle. In his youth he was very active in 4-H and Rural Youth Club. Later, he was drafted and served in the U.S. Army. After returning home from the service, he married Ellen Rovang on June 16, 1956 at Zion Lutheran Church in Fergus Falls. They made their home on the farm and Al continued to partner with his brother Elmer. They raised their five children on the family farm. He retired from farming in 1980 and after working two years at Olson Furniture he accepted a position as a salesman at Triple R Equipment. They moved to a residence in Fergus Falls in 1983. After nine years at Triple R, Al retired. In his retirement he assisted with funerals for Olson Funeral Home, drove a weekly route as courier for the Red Cross, and helped at the local food shelf. Throughout his lifetime, Al was an active member of Hedemarken Lutheran Church, holding many offices within the congregation, singing in the church choir, and also served as a Sunday School teacher. In the community, he served on school, elevator, oil company, and township boards. He was also a 4-H leader and served for a time on the YMCA Board. Music was especially important to Al throughout his lifetime. He played baritone in the Carlisle Band for over 70 years and sang in both the Barbershop Chorus and The Men of Note. Al and Ellen enjoyed traveling over the years and took many bus trips with “The Friends Group” along with long trips with the Carlisle Band, most notably to Norway in 1984. They also spent parts of many winters in southern Texas. Al enjoyed hunting and fishing, especially his annual deer hunt in northern Minnesota and fishing on Lake of the Woods. He also enjoyed being in bowling leagues, shooting pool, and golfing. Al and Ellen were faithful in attending their children and grandchildren’s many activities throughout the years. Preceding him in death were his parents, siblings Mabel (Sterling) Olness, Eunice (Tony) Glesne, Elmer (Lena) Hexum, Alice (Jorolf) Ronnevik, Mildred (Gerald) Tysver, numerous other family members, and many dear friends. Survivors include his wife Ellen; children Kurt (Elise) Hexum of Cedar Rapids, IA; Daryl (Laurie) Hexum of Shoreview, MN; Debbie (Dave) Grimm, of Fergus Falls, MN; Gary (Laura) Hexum, of Elizabeth, MN; and Dale (Michelle) Hexum, of Fergus Falls, MN; grandchildren Mychal (Krista) Hexum; Linnea (Travis) Offerman; Mindy, Joseph, Thomas, and Andrew Hexum; Jason (Bekah) Grimm; Lindsay (Darin) Rogness; Jacob (Ellyn) Hexum; Jessica, Caitlin, and Connor Hexum; Brianna (David) Staubo; Emily (Kenny) Wold; Kayla (Nathan) Doering; and Seth Hexum; and great-grandchildren George, Ellie, TJ, Millie, Naman, Ryan, Grant, Haylie, Esther, and Nora. The family would like to thank LB Hospice and Knute Nelson Hospice for their compassionate care these last several weeks. Memorials are preferred to the Hedemarken Cemetery Fund or the donor’s choice. Visitation: 5:00 p.m. to 7:00 p.m. Tuesday, November 2, 2021 at the Olson Funeral Home in Fergus Falls with a prayer service at 6:30 p.m. Service: 11:00 a.m. Wednesday, November 3, 2021 at Good Shepherd Lutheran Brethren Church in Fergus Falls. Clergy: Reverends Dale Hexum and Chris Eldredge Interment: Hedemarken Cemetery, Carlisle, MN Arrangements are provided by the Olson Funeral Home in Fergus Falls. Online condolences may be sent to www.olsonfuneralhome.com

Albert Norman Hexum, 94, of Fergus Falls, died Thursday, October 28, at his home surrounded by his family. Al Hexum was born January 18, 1927, to Albert and Olga (Sethre) Hexum on the home farm near Carlisle, MN. He graduated from Fergus... View Obituary & Service Information

The family of Albert Hexum created this Life Tributes page to make it easy to share your memories.