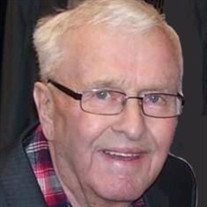 Alan Victor Snowberg, 91, of Fergus Falls, passed away on Wednesday, June 10, 2020, at LB Broen Home in Fergus Falls. Alan was born March 3, 1929, in Fergus Falls, the youngest of five children born to Carl and Amy (Lambert) Snowberg. He graduated from Fergus Falls Senior High School in 1947 and furthered his education at NDSU in Fargo. He was a member of the U.S. Navy, serving in the Korean War. Alan was a long-time employee for Otter Tail County as an engineering supervisor. On September 24, 1950, he married Barbara Swanson in Fergus Falls. Some of Alan’s hobbies included stained glass work, carpentry, and woodworking. He built a cabin on Star Lake. He enjoyed the cabin for over 50 summers. Alan was a wonderful husband, father, and grandfather. He will be dearly missed. He is survived by his daughters, Jane (Robin) Burns and Laurie (Bob) Deckert both of Fergus Falls; grandchildren, Andy (Carrie) Gillund of Minneapolis, Tara Gillund of Fergus Falls, Annie Deckert (Tim Dolan) of Fergus Falls, Lexi (Trevor) Anderson of Marshall, Brandon (Brittney) Deckert of Mountain View, WY, and Jordan Burns of Grand Forks, and five great-grandchildren. Alan was preceded in death by his wife of 69 years; his parents; an infant daughter, and three siblings. A private family service will be held. Alan will be put to rest at Oak Grove Cemetery. Arrangements are provided by the Olson Funeral Home in Fergus Falls. Online condolences may be sent to www.olsonfuneralhome.com

The family of Alan Snowberg created this Life Tributes page to make it easy to share your memories.

Alan Victor Snowberg, 91, of Fergus Falls, passed away on Wednesday,...