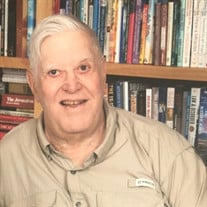 Alan Adams passed away peacefully in the Good Samaritan Center in Battle Lake, Minnesota on Sunday, January 31, 2021. Alan was born on February 22, 1934, near Wendell, Minnesota to Albert and Mary (Sheldon) Adams. Alan grew up on the farm near Wendell, Minnesota and attended school at the country school in Lawrence Township, graduating from Elbow Lake high school. Alan was baptized and confirmed at the Lawrence Presbyterian church, rural Wendell, MN. Alan joined the United States Army and was stationed at Fort Sheridan, Illinois, subsequently stationed in Germany. Up until his final days, he enjoyed sharing stories of his travels with the Army all over Europe. When Alan was honorably discharged from the United States Army, he came back to the family farm near Wendell, Minnesota and joined his brother Merwin Adams, forming Adams Brothers farms and Adams Seed. Alan was also a partner in Thunder Seed, Inc. until his retirement in 2000, when his son Paul took over the operations. On June 17, 1972, Alan married Ramona Ondracek. Together, Alan and Ramona farmed, operated Adams Seed and raised their two sons, Grant and Paul. In 1992, Alan had a farming accident that severed his right arm, which was reattached, but left him without good use of his arm. When he survived this tragic accident, he vowed to tell a joke every day to make life a little more fun for everyone around him. Anyone who knew Alan, knew he’d have a joke ready any time they saw him. Alan enjoyed farming, deer hunting with the Lawrence Deer Club, fishing, shuffleboard, telling stories and jokes, and traveling. Some of his favorite travel stories were of South America, Europe, Alaska, Hawaii and various domestic U.S. destinations. Additionally, he volunteered his time on various MinDak Cooperative Sugarbeet Grower committees, Minnesota Crop Improvement Association, Lawrence Presbyterian Church Session and committees, sang beautifully in the Lawrence Presbyterian church choir and 4-H. In his retirement, Alan and Ramona built a lake home on Stuart Lake, and wintered at their home in Siesta Village in Weslaco Texas, both places were very dear to Alan and Ramona. Alan is survived by his two sons, Grant (Karla) Adams of Nowthen, Minnesota, and their children Madeline and Sophia; and Paul (Crystal) Adams of rural Wendell, Minnesota, and their children Julia, Hope and Emily. Alan is also survived by his brother Merwin (Kathy) Adams, and sister Clarice Lacey; along with many nieces and nephews, cousins and friends. He was proceeded in death by his wife Ramona Adams, his parents Albert and Mary Adams, brother Don Adams, sister Irene Adams, brother-in-law Gerald Lacey, sisters-in-law Marion Adams and Marcine Adams, nieces Laurie Lacey Sanford and Lucille Adams, and nephew Doug Adams. Blessed be the memory of Alan Adams. Visitation: One-hour prior to the service at the church. Celebration of Life: 11:00 a.m. Sunday, June 6, 2021, at Lawrence Presbyterian Church, rural Wendell, Minnesota. Clergy: Reverend Kevin Patch Arrangements are provided by the Olson Funeral Home in Fergus Falls. Online condolences may be sent to www.olsonfuneralhome.com

Alan Adams passed away peacefully in the Good Samaritan Center in Battle Lake, Minnesota on Sunday, January 31, 2021. Alan was born on February 22, 1934, near Wendell, Minnesota to Albert and Mary (Sheldon) Adams. Alan grew up on the farm... View Obituary & Service Information

The family of Alan W. Adams created this Life Tributes page to make it easy to share your memories.

Alan Adams passed away peacefully in the Good Samaritan Center...