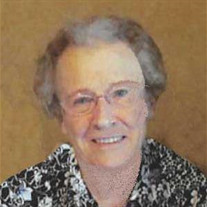 Adeline Oscarson Holte, 92, a resident of Fergus Falls, died Tuesday, July 10, 2018, at Sanford Health in Fargo, ND, following a stroke. Adeline was born April 28th, 1926 in Battle Lake, MN, to Julianna (Roen) and William Wentzel. She grew up north of Underwood, attended Barnhard school, and graduated from Underwood High School in 1944. Adeline married Donald Oscarson on June 26th, 1947 in Underwood with Pastor Jorgenson officiating. Don and Adeline lived in Fergus Falls until 1955, where Don was a partner with his father in Oscarson Implement. In 1955, Don and Adeline bought a farm in Aurdal Township and lived there for 40 years while raising their children and farming. They were active in their rural community, until they moved to Fergus Falls in 1995. They had three children: Dr. Dennis Oscarson (Lynda van Heyningen) of Westville, Nova Scotia; Diane Johnson (Rich Jibben) of Battle Lake, MN; and Jan (Michael) Zaragoza of San Diego, CA. Don and Adeline had five grandchildren: Chris (Tatum) Johnson of Battle Lake, MN; Angela Johnson (Todd Cross) of Corvallis, OR; Julianna Johnson (Paul Rauch) of St. Petersburg, FL; Jeff Johnson (Lyndsey Andersen) of Duluth, MN; and Mary Oscarson (Jon Wilson) of Winnipeg, Manitoba; and four great-grandchildren: Alex Johnson, Lily Johnson, Lucienne Adeline Cross, and Annika Wilson. Don and Adeline spent nearly all holidays with their families, including Thanksgiving and Christmas with grandkids and big family picnics on the 4th of July at their cabin on Pickerel Lake. Don passed away on July 26th, 2000. Adeline married long-time friend Henry Holte on July 2nd, 2003. Henry's family was also much beloved by Adeline, including Jan (Bob) Mittelstadt, Warren (Carrie) Holte, Douglas (Nancy) Holte, and their children and grandchildren. Adeline was an excellent homemaker, and also worked outside the home. In 1971, she started working at Lake Region Hospital as a nursing assistant and worked there for more than 17 years. She enjoyed her work and made many friends among her coworkers. One of Adeline's greatest joys was visits from her children, grandchildren, and great-grandchildren. When her grandchildren were growing up, she enjoyed having them stay overnight; she loved playing with them and letting the girls help her bake. Her grandchildren fondly remember her farm lunches as they "helped" Grandpa Don in the fields or watched the noon farm report with him. Her hobbies included quilting, embroidery, and counted cross stitch. She was an incredible vegetable and flower gardener and an avid baker: she sent packages of cookies to her grandchildren in college, and her Christmas cookie platters were legendary. She and Don enjoyed traveling, being active in their church community, and participating in activities at the YMCA. Survivors include her three children, five grandchildren, and four great-grandchildren; her brother, Duane (Anna) Wentzel, and many cherished nieces, nephews, and their families. Preceding her in death were husbands, Don and Henry; sister, Ruby Widness; half-brother, Berwin Wentzel; parents and grandparents; and great-grandchild, Leif Cross. Visitation: One hour prior to the service at the church Service: 11 a.m. Saturday, July 14, 2018, at Messiah Lutheran Church, Underwood, MN Clergy: Rev. Tim Collins Interment: Vang Cemetery, rural Fergus Falls, MN Arrangements are provided by the Olson Funeral Home in Fergus Falls Online condolences may be sent to www.OlsonFuneralHome.com

The family of Adeline Oscarson Holte created this Life Tributes page to make it easy to share your memories.